Mural depictions of the 1839 Amistad slave revolt by Hale Woodruff will line the walls of Talladega College’s new 9,730-square-foot art museum upon the building’s completion next year.

Painted in 1939 for the college, the three-panel Amistad mural – along with two separate Woodruff murals – will be permanently installed in the William R. Harvey Museum of Art named for the long-serving president of Hampton University, who is a donor and 1961 graduate of the college. 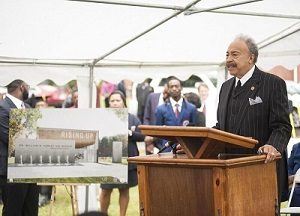 The museum’s construction is part of a three-building project at the college that includes a new suite-styled residence hall and Talladega’s first-ever student center.

“I don’t know of any higher education institutions in the country that are building three buildings at the same time,” says Talladega president Dr. Billy C. Hawkins. “And more so, I don’t know of a [historically Black college or university] that’s building three brand new buildings on the campus at the same time. So we’ve just been really blessed, but it’s been a lot of hard work.”

The Amistad murals – valued at $50 million following a three-year national tour to multiple cities – document the enslaved Africans’ resilience and struggle for liberation and survival in the New World. Woodruff’s painting was gifted to the college to celebrate the 100-year anniversary of the event.

Currently, the Amistad murals are being held in Atlanta at the High Museum of Art’s fine arts storage facility until the completion of Talladega’s art museum.

“The High Museum in Atlanta stepped up to the plate and never asked us for a dime,” says Hawkins of the college’s partnership with the museum to restore and hold the paintings. “They said, ‘We will partner with you because we believe that we need to preserve this artwork.’”

The murals reveal a storied history for the private, liberal arts college founded in 1867. In the foreword to the book Rising Up: Hale Woodruff’s Murals at Talladega College, Hawkins wrote: “The defense of the mutineers aboard that ship led to the founding of the American Missionary Association. Talladega College is one of several African-American institutions of higher learning founded by the AMA.”

In many ways, the construction of the residence hall, student center and art museum, and the prominence of Woodruff’s work as a faculty member at the college, serve as a rebuttal to notions of the irrelevancy of HBCUs today. The projects, Hawkins says, are the “necessary components to grow enrollment in higher education.” 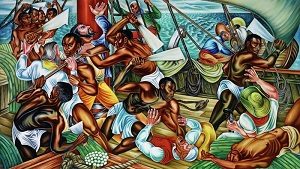 With Harvey in attendance, Talladega broke ground on the museum’s construction site last November during the college’s homecoming and 150th anniversary celebration. In 2014, the educator who recently celebrated 40 years as president of Hampton University, donated more than $1 million for the museum’s completion.

“Of all the accolades I have received over the years, this is by far the most honoring and humbling,” Harvey said at the groundbreaking. In a later celebration inside Talladega’s DeForest Chapel, he added: “Some of my fondest memories are of Talladega College. My professors and classmates helped make me who I am today.”

Despite some of the challenges that HBCUs continue to face, Hawkins says that Black colleges have always been places of opportunity for their students, adding that leaders have “always found a way to keep these schools alive and moving.”

As enrollment increased within Hawkins 10-year tenure from nearly 280 students in 2008 to more than 800 students today, Talladega officials see the need for new facilities to house students and keep them engaged on campus.

“We needed to build a new residence hall because as we have shot up to the 900- or 1000-[student] mark, we were short of beds,” says Hawkins. Previously, some students had been living in local hotels, he says.

The new residence hall will be 49,764 square feet and will include suite-styled living accommodations, study lounges on each floor, enhanced internet bandwidth, a computer lab, LED lighting and keyless entry ports. The building is scheduled to open for the fall semester and will house approximately 217 students.

A contemporary student center with an adjoining 2,000-seat athletic arena will also alleviate complaints Hawkins says he has heard from students over the years about having few things to do outside of class on campus or in town.

The student center is slated to open late spring of next year and will include a fitness center, banking center, dining hall, computer lab, reading room and offices for community or government officials to hold meetings. Students and community members will also be able to access a medical clinic that will be included in the building.

Built through a partnership with USDA, the campus projects are part of Talladega officials’ efforts to bring the institution back to “preeminence,” says Hawkins.

Significantly, Alabama Governor Kay Ivey and the State of Alabama have contributed $1.5 million to the construction of the institution’s art museum due to its historical significance and impact on the state.

“We’re a private institution. We’re not a state institution,” Hawkins says. “State governments don’t do that to be honest with you.”

Hawkins says that for the college’s fundraising efforts toward the campus building projects, a president is only as successful as his supporters and board of trustees.

“I can clearly say that my former board chair Dr. Harry L. Coaxum and my present board chair Mr. Isaiah Hugley both have been great supporters, as well as the rest of the board of trustees, in moving these projects forward,” Hawkins says. “It’s an exciting time for Talladega College.”

‘Shelter in a Time of Storm’ Details History of Leadership, Activism at Black Colleges