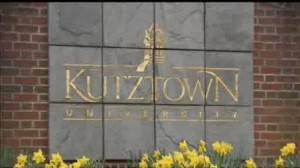 Pennsylvania is among 23 states that allow individual colleges or universities to decide if they’ll ban concealed weapons on campus, according to the National Conference of State Legislatures.

KUTZTOWN, Pa. — Students on some of Pennsylvania’s college campuses might be carrying more than books.

At least five Pennsylvania state-owned universities are now allowing guns on campus after the state’s lawyers concluded that an outright ban on weapons was likely unconstitutional.

Kutztown, Shippensburg, Edinboro, Slippery Rock and Millersville universities have all quietly changed their policies over the past year to reflect the advice of lawyers in the governor’s office and the Pennsylvania State System of Higher Education. Students in those schools are now allowed to have weapons on campus, though they are still generally banned from school buildings and athletic events.

Students with concealed-carry permits had questioned the constitutionality of blanket weapons bans at state-owned universities, prompting a legal review that found such bans were vulnerable to court challenge.

Pennsylvania is among 23 states that allow individual colleges or universities to decide if they’ll ban concealed weapons on campus, according to the National Conference of State Legislatures. Twenty-two states ban concealed weapons and five — Colorado, Mississippi, Oregon, Utah and Wisconsin — allow firearms on public university campuses.

Kutztown changed its policy April 19, though it had largely escaped notice until Kutztown President F. Javier Cevallos emailed students, faculty and staff about it Thursday night.

Under the new policy, licensed gun owners are permitted to bring their weapons onto campus, but not into buildings or athletic events without permission from the university police chief. The chief will consider making an exception if there is a “compelling reason” related to personal safety, the policy says.

“Our president does not believe that guns have a place on campus,” he said. “We will do what we can to keep our campus free of weapons and have written the policy to keep it as strong as possible to keep weapons away from buildings and campus events. We believe we provide a very safe environment for students to learn and live.”

Although there has been no legal challenge mounted in Pennsylvania, the state’s lawyers cautioned that “blanket firearms bans were vulnerable to constitutional challenge and exposed the universities” to legal claims, said Nils Hagen-Frederiksen, a spokesman for the governor’s Office of General Counsel.

About a year ago, the state system provided a model weapons policy for consideration by all 14 schools “that more narrowly tailored the firearms restriction, addressing both public safety and constitutional concerns,” Hagen-Frederiksen said.

Pennsylvania’s concealed-carry law is silent on the issue of guns on college campuses. Other state laws do prohibit firearms in K-12 schools and court facilities, but there is no statute banning firearms possession at state-owned universities.

Thus “an outright weapons ban on public college campuses may be a problem under Pennsylvania law,” Michael Moreland, a vice dean and professor at Villanova University’s law school, said via email.

Last year, he noted, the Colorado Supreme Court struck down the University of Colorado’s ban, ruling it violated the state’s concealed-carry law.

The new university weapons policies seemed unlikely to turn Pennsylvania’s campuses into armed camps. At Kutztown, gun owners are generally limited to wandering the campus with their firearms, locking them in their cars, or checking them in at the police department.

Still, as word of the new policy spread across campus Friday, students debated whether it’s a good idea to allow weapons.

“It promotes violence. You have lethal weapons on campus in a place where we’re supposed to get a higher education, not carry bullets and guns and be prepared to kill someone. It’s bizarre to me,” said James Alexander, 21, a political science major from Pottstown.

But another student raised the 2007 Virginia Tech massacre, in which a gunman killed 32 students before committing suicide, to argue in favor of a well-armed student body.

“It could potentially have been stopped,” said Tony Pavoncello, 20, a freshman from York. “If one or more students had been armed and had been there when he came in the door, you never know what might have happened. It might have changed something.”

Pennsylvania’s largest university, Penn State, bans all weapons from campus, though students who hunt or shoot recreationally are permitted to store them with police. Penn State receives a state appropriation each year but is not owned by the state. The University of Pittsburgh, likewise state-supported but not state-run, also prohibits weapons anywhere on campus.

“Our feeling is that police, who are trained in handling firearms, shooting accuracy during stressful situations and in making quick decisions and judgments, should be the ones with weapons,” Penn State spokeswoman Lisa Powers said via email Friday. “They are the experts.”

Gun-rights advocates, including Students for Concealed Carry, a group launched in the wake of Virginia Tech, maintain that an armed campus is a safer campus because police typically can’t respond quickly enough to stop a mass shooter in the act.

A campus police chiefs’ association, the International Association of Campus Law Enforcement Administrators, takes an opposing view. Its board has declared that allowing guns on campus could “dramatically increase violence.”

Although Kutztown changed its rules just a few weeks ago, the Pennsylvania State System of Higher Education appeared to be having second thoughts Friday, telling all 14 member schools to hold off on weapons policy changes until a task force on campus safety can weigh in.

Black Lives and the Struggle for Humanity