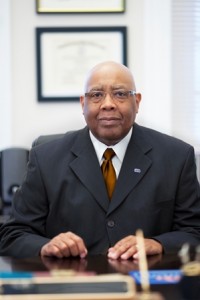 Dr. Elazer Barnette is responsible for the launch of Savannah State University’s new school of education.

By next fall, Savannah State expects to have a new school of education up and running. For the past three years, Dr. Elazer J. Barnette, the person responsible for its launch, has been securing full-time faculty and readying students eager to enroll in the STEM-based teacher preparation program that will offer biology and math with a concentration in secondary education. Looking down the road, Barnette, associate vice president for academic affairs, sees his graduates being snatched up by public schools in Georgia and in demand by corporations in need of those who know science and who can teach.

But for now, says Barnette, ensuring that the school of education is ready in 2014 to meet the rigors of a new set of national standards for teacher preparation and accreditation is at the heart of his efforts.

Over time, as national teaching standards have crept higher, HBCU education programs “have consistently stepped up and met the mark, and this time shouldn’t be any different,” says Barnette, who has spent more than a decade on the Board of Examiners of the National Council for Accreditation of Teacher Education, one of the two national accrediting bodies for the field. But as a new accrediting agency churns out standards aimed at improving teacher training and student learning, Barnette and a group of HBCU education deans say they fear the potential consequences such efforts may ultimately have on the continued existence of their teacher preparation programs and even on their institutions.

The Washington, D.C.-based accrediting body, which has operated as the Council for the Accreditation of Educator Preparation since January, was formed in 2010, the result of a merger between the larger National Council for Accreditation of Teacher Education and the much smaller Teacher Education Accreditation Council. For them, the time was right for change. Eyeing the “winds of reform” sweeping through the field of P-12 education, the accrediting bodies set out to do more than unite. In their literature, CAEP officials say they also plan “to show the value we add to the quality assurance, accountability, and the overall performance of the profession.”

Such an undertaking is “huge and complex and will mainly impact the practitioners,” says Dr. Tina Marshall-Bradley, a CAEP commissioner and a professor and associate vice president at Paine College, of the accreditation merger and standards overhaul.

By the time the accrediting body releases its final set of new standards in January 2014 for what graduating teachers should know and be able to do when they enter the classroom, CAEP officials suggest those programs seeking accreditation will have, for the first time, standards that are “leaner, more specific and more outcomes-based.”

This summer, CAEP’s board plans to approve its five proposed standards and sub-standards that include: Content and Pedagogical Knowledge (Standard 1); Clinical Partnerships and Practice (Standard 2); Candidate Quality, Recruitment and Selectivity (Standard 3); Program Impact (Standard 4); and Provider Quality, Continuous Improvement and Capacity (Standard 5). According to CAEP’s schedule, by 2016, new standards will be mandatory for schools and programs seeking their accreditation.

In the past few months, the impending changes to the standards have spurred a group of HBCU education deans and administrators into meetings with each other and with CAEP officials about how to respond while also buffering the mainstay program on their campuses. Together they represent educator preparation programs that graduate more than 50 percent of all Black public school teachers. As proposed, several of the CAEP standards, they say, could negatively “impact the delivery of their educator programs.”

While not in opposition to all of the standards, “our concerns are many,” says Stillman College President Ernest McNealey on behalf of the group of deans organized by the National Association for Equal Opportunity in Higher Education (NAFEO), an umbrella organization for HBCUs and predominantly Black institutions.

With a CAEP commission “heavily weighted with policy folks” and fewer practitioners, Marshall-Bradley suggests it may be the reason why HBCU deans feel some of the proposed standards don’t reflect the needs of their programs and what’s actually happening in the field.

“Based on historical data and if CAEP standards are fully implemented, this could be a likely scenario for HBCU teacher preparation programs,” explains McNealey, who also chairs the NAFEO board. “There will be fewer teachers with credentials from American colleges and universities; there will be an adverse impact on diversity in the teaching force, including gender, social class and race; and there will be a discriminatory stratification of institutions offering accredited teacher preparation programs based on historical advantages having little to do with preparing high-performing teachers.”

Diversity in teaching will still be at the center of standards, contends CAEP President James G. Cibulka. The teaching profession will focus on diverse, high-quality teachers. “We believe that the emphasis on quality and selectivity, coupled with an emphasis on intentional recruitment of a diverse teacher-candidate pool, will play a part in encouraging the best and brightest of all races and ethnicities to pursue careers in education.”

However, says McNealey, “The true test of a program’s quality is the strategies and measures in place that prepare an average candidate to be an outstanding teacher.”

Barnette says he was once one of those students. Soon, admissions standards for teacher training programs may be higher. CAEP will require cohorts of teacher candidates to have a collective 3.0 GPA and scores on national standardized assessments like the GRE, SAT and ACT in the top third. Barnette and others are asking CAEP: Where is the evidence?

“Do you have data to show that my 3.0 person will be a more effective teacher than my 2.5 [teacher]? Is this a research-based predictor based on a student’s ability to teach?” asks Barnette.

Standard 5.3: Quality and Strategic Evaluation is one of the proposed standards being questioned. It would hold preparation programs accountable when students default on loans or if its graduates aren’t hired or choose not to work in schools or elsewhere in the profession in which they trained. These are factors “beyond their control,” McNealey argues. Dr. Boyce C. Williams, senior vice president at NAFEO, agrees. Rolling issues of student loan defaults and graduation rates into the new standards will ultimately hurt HBCUs. The intended targets of the move, Williams suspects, are “the for-profit teacher training programs that won’t likely be the ones that suffer as a result of these changes.”

As a CAEP commissioner, Marshall-Bradley is in a position to influence the outcome of debates over national teacher education standards. But she makes it clear that her role there does not include being a voice for HBCU education programs.

Still, she believes HBCUs “have a lot to be concerned about” as the new standards are finalized. “I’m not sure that these are the standards that are going to ensure that we have teachers that cause all students to learn,” says Marshall-Bradley. “Our community is adversely impacted. It is our children who are not being educated properly, and they also represent the constituent group that we recruit into our colleges and universities.”

But the transition to CAEP, Marshall-Bradley adds, also signals opportunity for the HBCUs. Among them, “forging new and creative partnerships” with other traditional and alternative teacher preparation programs and stepping up their research on what makes a good teacher, something that is just as important as producing a good teacher.”