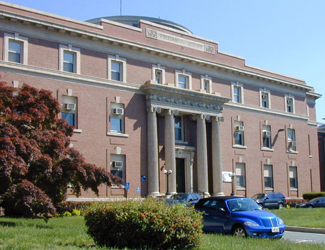 WASHINGTON — When the late John H. Johnson last appeared on the campus of Howard University in 2003, he came armed with a check for $4 million and the hope that his donation would someday be used as a down payment toward the construction of a new building that would house the communications school that had been renamed that year in his honor.

In fact, several months before the university presented him with the distinguished honorary doctorate and the news that his name would forever be associated with the School of Communications, the founder of Ebony and Jet magazine enthusiastically quipped: “I have been a big admirer of Howard ever since I attended the first NAACP meeting in Baltimore when Thurgood Marshall was named assistant counsel. I knew that he [Marshall] was a Howard graduate and I have been so inspired by the marks that he and so many other alumni have made on this nation.”

But in 2010—five years after Johnson died at the age of 87—Howard quietly dropped his name from the School of Communications and the university is still many years away from breaking ground on a new building that was initially slated to cost $250 million and was supposed to be completed several years ago.

“It’s so embarrassing,” says one Howard University board of trustee member who asked not to be identified. “It’s rather tacky, I think, to publicly name a building after a man with such a storied and distinguished career in the media and then to drop his name without any public explanation. You don’t do folks like that.”

According to several sources, Johnson—long considered to be the nation’s top Black publisher—relished the opportunity to have the communications school named after him and pledged to financially support it and the construction of a new building.

But his daughter, Linda Johnson Rice, who is now chairman of the Chicago-based Johnson Publishing Company, did not share his same passion for the project and opted instead to support her alma mater, the University of Southern California (USC), after her father died.

A former USC trustee, Rice gave $2.5 million to USC’s Annenberg School for Communication in 2007 to establish the Johnson Communication Leadership Center, which provides undergraduate scholarships and hosts seminars focused specifically on issues relating to African-Americans in the media.

When Howard announced a decade ago that it had decided to rename its communications school after Johnson, the decision was widely praised, with many media industry experts arguing that it would help the fiscally strapped university create a pipeline to help its students and alumni gain internships and jobs with Johnson Publishing Company—one of the largest African-American publishing companies in the country.

But that did not happen.

Instead, the university’s decision to drop Johnson’s name from the official title of the school has created some confusion among recent alumni like Kenneth White who continues to list on his resume that he graduated from a school that no longer bears Johnson’s name.

Many alumni say that Howard has not done enough to alleviate the confusion. For example, on the university’s website, Johnson’s name is still listed in various places, including on an active webpage soliciting donations to help defray the cost of building the new communications building.

“John H. Johnson died thinking that a school at Howard University had been named after him,” says the Howard trustee member, who pointed out that it is unusual for a university to change its mind on the naming of a school or a building after a public commitment has been made. “As an institution, we should be ashamed that we did not keep our word to him.”

While the initial decision to name the school after Johnson occurred during the presidency of H. Patrick Swygert, he resigned from his post at Howard in 2008 after 13 years on the job. The decision to drop Johnson’s name from the school occurred during the presidency of Dr. Sidney A. Ribeau, who was pressured last month to resign after just five years on the job.

Now, the university’s interim president, Dr. Wayne A.I. Frederick, has been tasked with finding a way to clean up the public debacle and apparently has been working with Rice to establish the John H. Johnson Endowed chair in Entrepreneurship.

“Howard University and Johnson Publishing Company have an enduring relationship,” says Frederick. “We continue to collaborate on education programs together like the newly created John H. Johnson Endowed Chair in Entrepreneurship, which we will officially launch this academic year. The program will mentor and train students to build on the pioneering work and legacy of the late entrepreneur and publisher John H. Johnson.”

Dr. Gracie Lawson-Borders, who was appointed dean of the school in July, did not return a phone call seeking comment.

University officials have been careful not to publicly place the blame on Rice for not following through on her father’s financial commitment to the school, with one administrator pointing out that “Mr. Johnson made the financial pledge to Howard University, not her.”

Rice says that the economic downturn in 2008 ultimately forced the company to redirect the initial gift that had been given for the construction of a new building to the establishment of a chair in entrepreneurship, which she says is a “wonderful opportunity for the university to honor my father’s spirit and proud legacy by preparing the next generation of entrepreneurial trailblazers.”

“We are very proud of the longstanding relationship we have with Howard University, and we value the sincere ties we have with the historical institution,” she says. “Howard University graduates have worked with Johnson Publishing Company in both the past and present, and the skills and talents they possess have helped to build the company to what it is today.”

Stimulus: School Money Will be Difficult to Cut Later