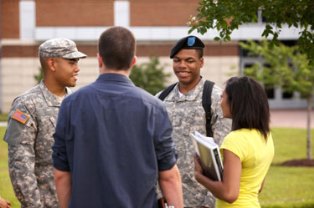 BALTIMORE — In a year when the Department of Veterans Affairs has repeatedly come under fire for problems ranging from deadly delays in medical appointments to its hefty backlog of benefit claims, the need for legal assistance for veterans has often taken a lower priority.

But that’s about to change.

Recent efforts to help veterans obtain benefits or gain access to other resources are underway at law schools, bar associations, community groups and even the VA itself.

“I think the sheer number of claims, and the resources that are available to process them, necessitate more lawyering in this area,” says Hugh McClean, director of the new Bob Parsons Veterans Advocacy Clinic at the University of Baltimore School of Law. “There’s just a tremendous need for veterans’ assistance right now.”

Four law students supervised by McClean, a veteran of the Air Force Judge Advocate General Corps and a former Air Force law professor, will work about 20 hours each week handling cases while also learning through a weekly seminar and reading assignments, he says. In the spring, the number of students in the clinic will likely increase to six.

There are only about 30 such veterans clinics at law schools across the country, McClean says. Pushing for more, the American Bar Association voted at its annual meeting Aug. 11 to urge law schools to create veterans’ clinics or, if that’s not possible, to serve veterans’ needs through an existing clinic.

At UB Law, the clinic’s initial focus will be on cases in which veterans need legal help to access their service-connected disability benefits and on “discharge upgrade” cases. The two are often intertwined, McClean says, since a veteran who received a dishonorable discharge may be prevented from accessing benefits.

“As veterans return from Iraq and Afghanistan, more veterans are filing claims than they’ve done in previous wars, so there’s a real need to a have a clinic like this in the community,” McClean says.

Eventually, McClean hopes to expand the clinic’s impact by collaborating with medical and other academic institutions in the state to create a “health law” program.

He’d also like to see the students get involved in other projects, such as the effort to launch a veterans’ treatment court program or docket in Baltimore. This type of court focuses on veterans with substance abuse issues or post-traumatic stress disorder, and emphasizes rehabilitation over jail time.

Maryland State Bar Association President Debra Schubert also named veterans’ courts as one of her top priorities earlier this year. While she was still president-elect, Schubert established the MSBA’s Special Committee on Veterans Courts, which recently held its first meeting, she says.

“It’s an issue that’s ripe, that should be addressed,” she says. “We owe it to our men and women who have served this country to do more to help them.”

Meanwhile, Jennifer Larrabee, deputy director of the nonprofit Pro Bono Resource Center of Maryland — the pro bono arm of the MSBA — said she’s seen an increase in attorneys pursuing this kind of work since the widespread problems in the Department of Veterans Affairs surfaced.

“I think once people hear about and learn about the process, how complex and lengthy it can be, a lot of pro bono attorneys have stepped forward because of that,” she says.

To increase the number of attorneys serving veterans, the Pro Bono Resource Center, in partnership with a few other groups, offers several free training sessions each year for attorneys who make a commitment to use their training pro bono.

In June, an annual conference and training event that focused on claims for service-connected disability benefits drew 80 attendees, including 40 volunteer attorneys and law students who made a commitment to assist veterans pro bono, Larrabee says. The organization is planning another pro bono training session in November.

For the veterans, Larrabee says, having an advocate makes all the difference. After taking the training course herself, Larrabee handled the case of a veteran who had developed a respiratory disorder while in the military. The VA eventually granted him about $70,000 in back benefits and significantly increased his monthly benefit payment — but, she said, he told her he would have given up long before receiving the benefits if he had been dealing with it alone.

“Just navigating the system and the process through the VA, with the long timeframe, can be very overwhelming and daunting,” she says, especially for a veteran who has suffered physical or mental trauma.

The Pro Bono Resource Center doesn’t directly provide legal services; rather, it recruits, trains, and mentors attorneys, Larrabee says. Clients are generally referred to pro bono attorneys through the Homeless Persons Representation Project, an organization geared toward helping homeless veterans receive the benefits they’re due and ultimately get back on their feet.

Even with an increase in qualified veterans’ affairs attorneys, the greatest concentration of pro bono lawyers is still located in the state’s more heavily populated cities. Homeless veterans in rural counties don’t have an easy way to access legal services.

Michael Stone, a 2013 UB Law grad, is working with the Homeless Persons Representation Project to change that. A new program, to be launched in September, will connect rural veterans with pro bono attorneys through Skype video conferencing technology.

“It’s a very easy and inexpensive way to utilize resources,” he says.

The program will consist of “intake clinics” around the state where veterans can meet with volunteers, fill out paperwork and eventually meet with an attorney over Skype, Stone says.

Stone, who received a fellowship from the nonprofit organization Equal Justice Works to get the project off the ground, described the rural program as an “extension” of the existing Veterans Legal Assistance Clinic at the Veterans Affairs Administration Medical Annex in Baltimore, which opened last year.

Although he’s not yet sure which rural areas in the state the program will target, Stone said attorneys for the program will mainly be drawn from the network of pro bono lawyers who work with the Veterans Legal Assistance Clinic.

Most cases handled through the rural project will be those of homeless veterans looking to access service-connected disability benefits, Stone says, although meeting with homeless veterans could also give him the chance to provide them with information about other legal aid services.

“It’s finally bringing some sort of nonprofit legal help to a community that hasn’t had access to it,” he says.