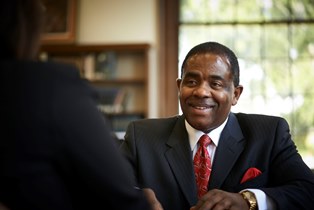 After a long career as a public school teacher and nearly four decades in higher education, Billy C. Hawkins has become an outspoken critic on the issue of misclassifying students as learning disabled.

Dr. Billy C. Hawkins knows firsthand the dangers of being inaccurately diagnosed with a learning disability. That identification marker, he says, is too often assigned to African-American boys, creating a negative stigma that comes with a tremendous cost.

“I’ve had conversations with parents who don’t know what to do,” says Hawkins, who has been president of Talladega College, a private historically Black college in Alabama, since 2008.

“Too many of our youngsters go through our school system and have these negative labels placed on them as a result of this so-called sophisticated diagnostic testing,” he says. “I was one that had been routed in and out of special education as a kid. And if it had not been for a high school principal who challenged the system and put me back in regular classes, who knows what would have happened to Billy Hawkins?”

After a long career as a public school teacher and nearly four decades in higher education, Hawkins has become an outspoken critic on the issue of misclassifying students as learning disabled, sometimes chiding public school districts for placing large numbers of Black students into special education classes in an attempt to secure additional funding for their beleaguered schools.

“I’ve testified before Congress about learning disabilities and I’ve written two books,” he says. “I had this negative label placed on me and yet I finished undergrad in three and a half years, went on to earn a master’s degree with a 4.0 grade point average and then earned a Ph.D.”

Now, he hopes that his personal testimony will help to inspire a new movement focused on how best to educate young African-Americans, who o­ften may never get a chance to pursue their life’s ambition because they are deemed as learning deficient. “All students can learn with the right support,” says Hawkins.

That attitude has placed Hawkins in good stead. Within academia, he has developed a reputation for helping to turn around troubled institutions.

As president of Texas College from 2000 to 2007, he helped the HBCU regain its accreditation — a great undertaking — and membership within the United Negro College Fund.

“I went into that job to rebuild that school,” says Hawkins, who helped put Texas College on firm financial footing and increased student enrollment within his first 10 months on the job. “I developed a reputation and was recruited to Talladega in 2008.”

At the time, Talladega was also on the verge of losing its accreditation. The historic institution that had graduated more college presidents than any other institution in the country was mired in major financial problems. Student enrollment had dwindled to about 300 students.

“People thought I was kind of nutty for taking this job,” Hawkins says. “The campus was rundown. Audits had not been in the black for years. But I did my homework and what my homework told me was that this HBCU has always been a premier institution standing for academic excellence.”

Within his first 10 months at Talladega, he increased enrollment to more than 600 students — an 85 percent increase — and embarked on an ambitious effort to rebrand the institution.

“We came in with the attitude that this is the hand we’ve accepted,” he says about the school’s troubled past. “We didn’t spend time looking to blame past administrations. We took a different approach.”

Today, there are more than 1,000 students enrolled at the small liberal arts college and Hawkins says he has plans to increase enrollment to about 1,500 over the next few years. Hawkins’ ingenuity has caught the attention of alumni like Hampton University President William R. Harvey, who has agreed to donate $1 million for the construction of the William R. Harvey Art Museum at Talladega.

The museum will provide a permanent home for artist Hale Woodruff’s Amistad murals, painted at the Savery Library at Talladega, which have been appraised at $40 million and are currently being shown nationally in cities such as Atlanta, Chicago and New York. Later this fall, the murals will be on display at the Smithsonian American Art Museum in Washington, D.C.

Harvey says that his passion for African-American art began at Talladega in the classroom of Dr. David Driskell, the famed art historian and artist.

“My professors at Talladega College gave more than instruction; they taught us about life,” he says. “Dr. Driskell cultivated my appreciation and advocacy for African-American art.”

Harvey says that he started an African and Native American collection at Hampton and is now happy to have his name lent to the Amistad murals at Talladega.

Hawkins has also spent time educating the public about Talladega’s role in the civil rights movement. For example, it was on Talladega’s campus in 1959 that Dr. Martin Luther King Jr. met Andrew Young, who became one of his closest advisers and would go on to serve as a congressman, ambassador to the United Nations and mayor of Atlanta.

Thanks to Hawkins, Hank Thomas, who was a Freedom Rider during the tumultuous 1960s, is now a member of the school’s Board of Trustees.

Several years ago, Hawkins decided to create a marching band, a decision that startled many. “People said, ‘How can you start a marching band without a football team?’” Hawkins recalls. “But I’m a doer and when I believe in something, I believe in giving 110 percent to make it happen.”

Now in its third year, the band has approximately 300 members and regularly competes at the Honda Battle of the Bands, an annual gathering of HBCU marching bands.

Plans are currently underway to build a new dormitory, recreation center and an $8.5 million student center on the rural campus. Hawkins has also started a presidential honor society, and has invited students with 3.5 GPAs to participate.

“We put athletes on the field with uniforms — we should put our presidential scholars in uniform,” he says, adding that a Chicago tailor flew in and personally fit all of the scholars with powder blue and crimson blazers that they wear at all major campus functions.

“It’s an exciting time for Talladega,” says Hawkins, who says he sometimes wonders how his own professional trajectory might have turned out had that high school principal not advocated on his behalf during his years as a student in Kent, Ohio.

“You just keep performing to try to make yourself and the institution the best that it can be.”