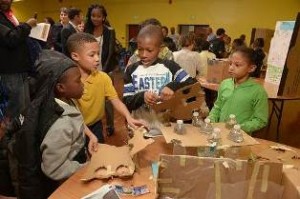 A common complaint of university campuses is that they can be isolated, ivory-tower-like places. At Johns Hopkins University, this is not the case. ­Through a series of initiatives directed at local K-12 schools that have been implemented piece by piece over the years, the university is directly engaged with the urban, and occasionally troubled, community that surrounds its campus.

One such initiative has just started its second year of implementation: Johns Hopkins’ STEM Achievement in Baltimore Elementary Schools (SABES) program. SABES’ goal is to raise STEM as a value in Baltimore.

SABES came about from a series of discussions at Johns Hopkins on how to best formulate a collaboration between the School of Education, the Whiting School of Engineering and Baltimore City Public Schools. With a $7.4 million, five-year grant from the National Science Foundation (NSF) in 2012, SABES moved off the ground and helped make those conversations a reality.

“So [SABES is] a little different than prior MSPs [Mathematics and Science Partnership programs] because the idea was that we would not simply focus on, let’s say, a classroom or a school or teacher professional development, but that we would think about the community as a whole and think about how to reach beyond the classroom,” says Dr. Michael Falk, a professor of materials science and engineering at Johns Hopkins. Falk is a principal investigator with SABES.

Since the approach is not to adopt a whole school district, but rather engage with communities, SABES has concentrated its outreach to Greektown/Highlandtown, a neighborhood in southeastern Baltimore with a sizable Hispanic population; Greater Homewood, which directly surrounds the Johns Hopkins campus; and Park Heights, which is home to a large foreign-born Black population in Baltimore.

“We have three focal points within the grants,” says Alisha N. Sparks, elementary school STEM program manager at the Center for Educational Outreach at Johns Hopkins.

The three prime foci are in-school programming, after-school development, and community events, which help students showcase their projects to parents and other community members.

Earlier in her career, Sparks was a high school math teacher. “For me having a degree in mathematics and being a minority in the field, I’ve had times when I’ve felt really isolated,” she says.

“And so I want to make sure that students have the opportunity, one, to gain exposure to STEM and engineering, to understand that it’s something that they can have a career in, and, two, [to make] sure that there’s a community of people to support them,” Sparks adds.

The program is supported by volunteers from Johns Hopkins. This year, Falk says that around 160 students, post-docs, faculty and alumni stepped forward to help out. Their motivation? A simple desire to help out and be engaged with the Baltimore community.

“In our original proposal, we had written in some small monetary incentives. But what we realized after interviewing the students who had worked on the project in the first year was that the monetary incentives were really not even a small part of the motivation for doing the work. They were doing it because they value the opportunity to be engaged in the community around Johns Hopkins,” Falk says.

SABES focuses on students in the third through fifth grades. “We’re working with the teachers in those grades and those schools to make sure they have high-quality, project-based curriculum, which enables the students to learn STEM in a hands-on, inquiry-based manner,” Falk says.

“At the same time, we’re working with the teachers, coaching and professional development to make sure that they’re comfortable, delivering the curriculum and that they have an opportunity to learn the core content,” he adds.

Partnerships in the community

In the after-school component, SABES partners with after-school providers at the elementary schools. Since most after-school professionals tend to not have engineering degrees, this allows Johns Hopkins volunteers to share their knowledge and pilot elementary-student-driven projects.

“The [elementary school] students go through their community and identify something STEM-related that they can do that’s of significance to them and their community, and then work on their projects after school to see if they can realize their idea,” Falk says.

Jonathon Rondeau, president and CEO of the Family League of Baltimore, says that Barclay Elementary School students last year identified homelessness as the issue they wanted to solve in their neighborhoods.

“A team of kids with engineers designed a tent that experimented with different fabrics to find out which would be the most weather resistant,” he says.

“They were taking a need that the kids had identified—which was homelessness—and adding a STEM component,” says Rondeau of the Johns Hopkins engineers who worked on the project.

He says that the Family League helps support 47 after-school programs in the city of Baltimore, in addition to its involvement with SABES.

Through SABES, and its projects such as developing tents to protect the homeless from inclement weather, Rondeau says he hopes that students will see that STEM has an almost infinite number of applicable uses and can lead to a range of jobs and career paths. The Family League has identified STEM as a value they want to promote in Baltimore.

“We want kids to graduate high school and move on to a career with the idea that you don’t have to be a doctor, you can still be in the STEM field,” Rondeau says.

According to Rondeau, the program has not run up against any abnormal challenges thus far in its nearly two-year run.

“I think the challenge is in two different worlds coming together: the after-school world and the Hopkins engineering world. Some of our after-school programs haven’t necessarily worked in STEM and the department that’s facilitating this program hasn’t worked in after school. And so, it’s learning each other’s languages and learning how to connect the two worlds,” he notes.

Falk says the roadblocks SABES has encountered are common to similar schools.

“The challenges that schools in high-need, urban areas face when attempting to implement high-quality science and engineering programs and after-school programs are formidable,” he says.

“There’s a lot of turnover of staff, of administration; there’s a lot of mandates from above, whether it be testing or other sorts of things like that. It really constrains the capacity of what the school can provide in terms of high-quality instruction,” Falk adds.

In the first year of the program, Falk says that SABES organizers made contact with three elementary schools. But over the summer, two principals left, just before SABES was about to start up. That meant that the incoming principals were adjusting to a new school—not to mention the initiation of SABES programming.

Despite that, Falk says that overall it has been a successful start. The community events in the spring and fall, which give students a chance to show their parents what they have been working on, have been particularly successful.

So what awaits SABES after the five-year grant ends? Though Falk says the program is designed with sustainability in mind, what form it will take is not yet clear. The conversation has begun, however, with partners like the Family League, to see if a plan for future, continued implementation can be developed.

Seminar Focuses on Recruiting Black Males to the Teaching Profession

Report: Congress Needs to do a Lot More to Ensure Educational Equity During the Pandemic

Summit to Focus on Creating Pathways for Educational and Economic Mobility