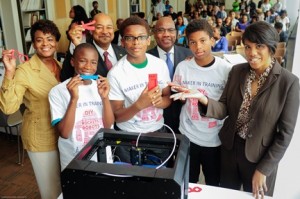 To Rose Kirk, president of the Verizon Foundation, an HBCU partnership made sense.

“We knew that we wanted a relationship with historically Black colleges and universities because it’s important that these kids are in an environment where they can see themselves and they can see success and they can see potential, and historically Black colleges and universities bring that and some,” said Kirk. “Not that you couldn’t see the same thing at a college that didn’t particularly serve this segment, but I think there’s something to be said when you are working alongside of other kids and coaches and mentors who look a lot like you. It gives you that sense of confidence, it gives you that sense of purpose, it helps you to understand what your full potential could be, so that’s why we chose [these schools].”

Said Dr. Eugene DeLoatch, dean of Morgan University’s School of Engineering, when Kirk’s staff made the call with the idea, Morgan was very happy to engage in what he emphasized is a real, hands-on partnership with the corporation.

“This is what we do: we develop talent,” he said.

He went on to acknowledge the historically successful role Morgan has played in developing engineers of color in the state of Maryland—“a state where you couldn’t be an engineer out of College Park,” where the state’s flagship institution is located, because of legalized segregation. “You just couldn’t.”

But DeLoatch said partnerships like the Minority Male Makers program are critical to the furtherance of the mission, because “we can’t do that without resources. … We can’t charge these kids what we need to develop the talent.”

“Verizon is understanding all too well that the nation must produce more Black males in the engineering space,” said Wilson.

“We’ve always got ideas in the bank,” DeLoatch continued. “We have the people resources [to train up the next generation of minority engineers].”

“Our problem is that we don’t have a bank,” added DeLoatch.

“Of course it makes sense that a company like Verizon, a technology company, is investing its resources in determining how we can give a brighter future to the youth of America, particularly those that are often marginalized and whose potential is often overlooked.”

Those issues are not new, said DeLoatch.

“What we’re faced with today is that we don’t understand our history,” he said. “There’s nothing wrong with those kids. … But we have gone all the way from [when he was a student in] 1952 to 2015 … and it’s still only 3 percent of engineers are African-American. That’s our problem. They’re not the problem.”

The problem, said Kirk, is that society is completely overlooking young men of color.

“What we found is that nobody is paying attention to little Black boys and to little Hispanic boys and that they deserve the same opportunities that so many other kids have. And therefore, so we decided to create a program that would allow them to learn coding and entrepreneurship and collaboration and public speaking and all of these tremendous skills that are going to further them in their life mission.”

“It’s good community sense, it’s good public sense, it’s good every kind of sense to bring [young, minority] males to the table,” said DeLoatch. “If we don’t bring the young people that we have in this program—males—then it’s absolutely over for the United States” and the national effort to compete globally on the innovation stage.