Cheyney University, located in the bucolic hills of rural Pennsylvania, decided to do a bit of introspection. In May 2017, the university released a report that included detailed recommendations for how the 180-year-old institution could improve its financial issues and graduation rates and commit to permanent leadership. 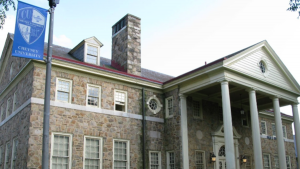 Cheyney — the nation’s oldest historically Black university — has been facing mounting challenges for several decades. Ten years ago, the university began to make the necessary reforms after a task force appointed by the Pennsylvania State System of Higher Education (PASSHE) Board of Governors initiated a proposal “to ensure its long-term sustainability,” says Kenn Marshall, a spokesman for PASSHE, the education leader for the 14 state and state-supported universities in the state of Pennsylvania.

PASSHE presented its findings and recommendations at a public meeting held in May. The task force report noted that sustainability at Cheyney can begin with the development of an “operational model.” The model placed emphasis on how administrators could improve student success rates, increase student enrollment, revise academic programs, better monitor finances, and ensure longevity in top leadership posts.

“To ensure a strong future, Cheyney is developing a focused mission that will enable it to meet the needs of students today and tomorrow, while ensuring financial and operational sustainability,” the report stated.

In an effort to reverse the school’s current financial standing and enrollment rates, the task force report suggested removing programs such as sports and focusing solely on academics.

Others have said that Cheyney should consider merging with another state-affiliated institution such as West Chester University.

Dr. Marybeth Gasman, director of the Penn Center for Minority Serving Institutions and a member of Paul Quinn College’s Board of Trustees, says that it’s important for Cheyney — which was once known for its robust teacher education program — to focus on signature academic programs and other strengths at a time such as this.

“The best thing to do when an institution is in crisis is to focus,” says Gasman, an expert on HBCUs.

Like Cheyney, Paul Quinn College in Dallas, Texas, was once in financial trouble and faced the prospect of closing its doors. However, its president, Dr. Michael Sorrell, strategically turned the school’s crisis around in less than a decade. After adopting a “work college” model, Paul Quinn has become the first historically Black college to be recognized as a work college and has watched its student enrollment steadily increase each academic year.

“I think the institution should look to Paul Quinn College to examine their approach and use it as a model,” says Gasman.

The work college model essentially helps students graduate from college with less debt by working either on or off campus with businesses that are partnered with the school’s program. The model shaves off a significant portion of student tuition and debt, which experts say is critical in today’s economic climate.

Dr. Larry J. Walker, a Cheyney University alumnus, says the university’s current status is primarily the result of a lack of funding but can be reversed with more support, higher enrollment rates and the hiring of a permanent president.

He also says that, moving forward, the university needs a leader who can hit the ground running on day one.

“I think that the individual needs to be someone who understands Cheyney’s history and is committed long-term to helping turn the university around,” says Walker, who was recently appointed to the Cheyney Foundation board. “I don’t mean two years. I mean they really need to be committed to turning the university around, and working over the next several years. Because it’s going to take time to do that.”

In order to fully reverse the institution’s problems, Walker also says it’s important that collaborations are forged among the university’s alumni, state leaders and HBCU advocates. He says that the brainstorming of ideas will ultimately lead to the discovery of a balanced and holistic approach to creating a blueprint for the university moving forward.

“We need those who support Cheyney to come together collectively and talk about what’s in the report,” says Walker.

“We need people who are directly involved in the institution on an everyday basis to really make decisions about the future of the institution,” says Palmer.

The long-term viability of the university is dependent upon an increase in student enrollment.

“Some of the decrease has happened over the last couple of years, but I think this year we expect an increase in students,” says Walker. “Obviously, we want to continue to focus, like any other HBCU, on that five-year retention rate.”

There also is a great concern for what programs and/or initiatives at the university may or may not be terminated.

The state-issued report suggests that NCAA athletics be eliminated due to high participation costs and the school’s small enrollment size. In addition, the report recommends that a number of academic majors be eliminated to ensure that students are better prepared and focused to continue their education or begin work once they graduate.

The report reads: “The model requires a focused, integrated set of academic programs (with 10-12 majors) that prepare students for continued scholarship (e.g., graduate school) and meet the workforce demands of Pennsylvania and the broader mid-Atlantic region.”

Alphonso Coleman, president of the Greater South Jersey alumni chapter for Cheyney University, says that both academics and NCAA athletics should remain at Cheyney. A retired educator, he says that the university can put a stronger emphasis on teaching programs to prepare students for a career in education and maintain a robust sports program at the same time.

“I would like to see them get an education program back in that runs all the way through to high school, and right now we don’t have that,” Coleman says. “We just have early childhood education. That was Cheyney’s niche back in the day — education.”

Cheyney students have responded to the task force report with both concern and excitement. Meghan Sowersby, a Cheyney University junior, is a member of the Keystone Honors Academy, an enrichment program for high-achieving students that provides them with scholarship opportunities and access to cultural, social and professional experiences.

“I believe it is important that the state pay attention to Cheyney because it is such an essential school, both historically and in the present,” says Sowersby. “I have been reading the reports as they are sent to us, and so far I like what I have seen. I know that they have a deadline set for later this year, so I am excited to see the final plan that they produce regarding moving forward.”

It is not clear what recommendations the university will ultimately settle upon in an effort to save and reclaim its narrative. However, the search for a permanent president is already under way.

According to Robert W. Bogle, chair of the Council of Trustees and publisher of the Philadelphia Tribune, one of the nation’s oldest Black newspapers, progress is being made.

“Changes are already underway to ensure that the Cheyney of tomorrow is both stable and dynamic, and we will find a long-term leader who has the strength and vision to guide us on this new path while respecting this university’s rich tradition,” says Bogle, who notes that the school’s interim president, Aaron Walton, has been a member of the Board of Governors as well as the task force and will be spearheading the campus’s efforts moving forward.

LGBTQ Group at Fordham Says No to Chick-fil-A