It’s a mission that he is seeking to accomplish in his capacity as an associate professor of education at Duquesne University, where Prier teaches courses including “Social Justice in Educational Settings” and “Ethics, Education, and the Teaching Profession.” 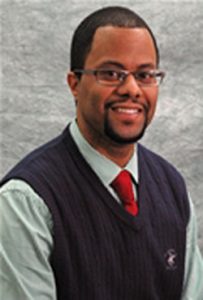 And it’s work that is aided by a new book by Prier, titled “The Media War on Black Male Youth in Urban Education,” published earlier this year by Routledge Research in Educational Equality and Diversity.

The way Prier sees it, the onslaught of criminalized images of Black men — from the 1915 film “Birth of a Nation” that portrayed Black men as villains and violent rapists, to the “gangsta” narratives of contemporary rap music and the disproportionate news reportage on Black perpetrators of crime — all conspire to induce a punitive approach toward Black male students in America’s schools.

The situation can be exacerbated if newly minted teachers have only had limited experience in the African-American communities in which they’ve been assigned to teach, Prier argues.

“That creates antagonism between teachers and students,” Prier said. “When they have not lived around, played with, interacted with Black students, they then unconsciously or subconsciously act on mental schemas and familiar stereotypes, so they perceive a young man coming into the classroom — sagging pants, hoodie over his head — that to them signals the videos that they saw on television all their life.”

In America’s streets, such preconceived notions can have fatal consequences when it comes to interactions with law enforcement. Prier recounts a several emblematic cases from the past few years — from Trayvon Martin to Tamir Rice — to illustrate and underscore that point.

However, in America’s classrooms, the consequences play out in what Prier refers to as a “hidden curriculum of punishment.”

“Such a curriculum is informed by criminalizing perceptions of these students,” Prier writes in Chapter 1, titled “Matters of Black Life in Media.”

“How and why teachers develop these perceptions in media is a vital area of interrogation in urban education.”

The issue of racial disparities in school punishment was a focal point of the Department of Education under the administration of President Barack Obama.

Black K-12 students were 3.8 times as likely to receive one or more out-of-school suspensions as White students, the report found.

“In our investigations we have found cases where African-American students were disciplined more harshly and more frequently because of their race than similarly situated white students,” the Department of Education said in a 2014 “Dear Colleague” letter. “In short, racial discrimination in school discipline is a real problem.”

However, student advocates have raised concerns about the Department of Education under Secretary of Education Betsy DeVos and President Donald J. Trump apparently planning to reverse course. According to a memo issued earlier this year by Candice Jackson, the acting assistant secretary of the Office for Civil Rights (OCR), investigators in the office will no longer be required to do broad investigations of civil rights complaints to find systemic patterns.

The Department of Education has said the move is about efficiency.

Federal policy notwithstanding, Prier says the issue of a punitive approach toward Black males is engrained in American culture. He says it’s not just about the periodic news report on this or that individual Black suspect or convict, not to mention what he argues are more sympathetic portrayals of White perpetrators as “psychologically abnormal” or being otherwise “good kids.” (In his book Prier describes a dualistic phenomenon he refers to as the “guilt of Black innocence” and the “innocence of White guilt”).

“I’m talking about how America has presented one picture of our humanity, and it has not given us the full scope of our humanity that is our just due,” Prier said. “America has not seen enough of the goodness and the greatness from Black people.”

In his book, Prier speaks of his prior work having students and teachers develop social contracts of commitment to their schools, places of worship and communities, and having students engage in sessions such as “Authoring Your Own Image” that draw on Hip Hop culture. He recommends the construction of “new narratives” that tell the full story of African Americans.