For Espinoza, Collaboration a Major Component of Leadership - Higher Education

For Espinoza, Collaboration a Major Component of Leadership

From a young age, Juan Espinoza and his brothers were told that education was the most important thing a person could have. 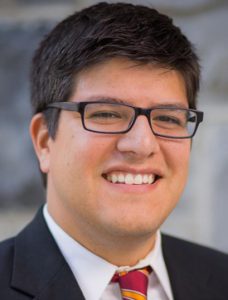 “I’m a first-generation student. My parents are immigrants from Bolivia, and when they arrived here in the 1970s, they knew right away the importance of an education in American society. So they wanted to make sure they did everything they could to instill that priority in us,” says Espinoza, assistant vice provost for enrollment management at Virginia Tech University.

In 2004, Espinoza graduated from Virginia Tech, receiving bachelor’s degrees in political science and public and urban affairs. He continued his education at Radford University and received a master’s degree in corporate and professional communication, while serving as the assistant director of admissions.

In his 10 years of administration at Virginia Tech, he has focused on numerous diversity programs, specifically diversity recruitment programming. He has also been involved with international admissions, traveling to more than 60 countries as part of student recruitment.

The governor of Virginia appointed Espinoza to serve on the Virginia Latino Advisory Board, which advises him on issues related to Latino constituents.

Early in his career at Virginia Tech, he restructured programs so that they would be more beneficial to students, providing them with an enriching experience.

In addition to his leadership role at Virginia Tech, Espinoza is also president of the Virginia Latino Higher Education Network (VALHEN), the largest nonprofit in Virginia that focuses on serving students who are pursuing higher education. The organization established the Hispanic College Institute in 2012 and has since collaborated with Virginia Tech University and brought Latino students to the campus for a residential summer program.

Espinoza says the partnership, which targets rising junior and Hispanic Latinos across the commonwealth of Virginia, has been a great success. In its third year of partnership with Virginia Tech, the program typically brings 150 to 175 students to campus. Surveys show that students who come into the program considering a bachelor’s degree leave considering a master’s degree or a Ph.D.

“These students not only get the resources and knowledge that they need to be successful, but most importantly, they get confidence,” says Espinoza.

Espinoza says the Hispanic College Institute was recognized by the Obama administration a little over a year ago as “a bright spot among Latino education.”

“Although I had so much parental support and encouragement to be able to go to college, I didn’t have necessarily anyone to help guide me.” He acknowledges it is tough when a person is the first in his family to have taken part in such a journey.

Overall, Espinoza is passionate about serving underrepresented and first-generation students and their families and wants to be known as a higher education administrator who is a collaborator.

Recommendations to be presented from yearlong diversity audit