Adult learners are a growing share of the overall student population in the United States, and states and institutions alike are looking for new and better ways to serve them. For this particular population, who are more likely to have jobs or a family to care for, affordability and access are two of the most important considerations. 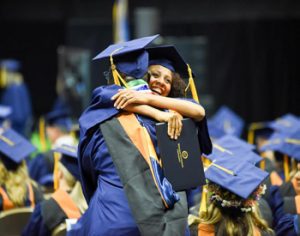 Over the past 20 years, one institution has focused on adults, with increasingly successful results. Western Governors University (WGU), a nonprofit online school that now serves 84,000 students, got its start in a somewhat futuristic vision of what education could be.

In the mid-1990s, 19 western governors gathered to discuss possible solutions to what were then some of the main challenges in higher education. Presciently, the governors had a sense of where the tech landscape could head and saw a need for education that would be able to serve residents of western states who live in remote, rural areas, far from public colleges and universities.

WGU differs from traditional schools in two key areas: degrees are acquired on the basis of students’ existing competencies and work experiences, and it subtracts traditional brick and mortar schools from the equation altogether. The institution delivers its education entirely online, meaning that it can cut costs to the bone. Its non-traditional status, however, also has led to a disputed finding by the Department of Education’s Office of Inspector General that WGU should return nearly $713 million to the department because 69 of its courses failed to provide “regular and substantive interaction between students and their instructors,” as required by federal law.

At the time of its founding in 1997, in an era before smartphones and the internet became ubiquitous, WGU sounded like a far-out idea.

“It started at a time when it was really impractical to think of online education in the way that we think about it today,” says Dr. Kevin Kinser, professor of education at the Penn State College of Education. “It was really started as an institution that was looking to the future — saying, ‘What if we could do it this way?’”

As with many experiments, WGU took some time to gain traction.

Enrollments were low for years after its founding in 1997, and when the institution finally gained accreditation in 2003, it had only 500 students. Over time, the institution chose to hone in on four core areas: health, teaching, business and IT.

Twenty years later, WGU has unquestionably hit its stride. In so doing, it has gone from pioneering to normalizing competency-based education, which measures educational outcomes on students’ proven “competencies,” or skills and knowledge, versus time-to-degree. As early as 2011, former Education Secretary Arne Duncan said that he wanted to see competency-based education programs like WGU “be the norm” rather than the exception.

So, what allowed WGU to go from 500 to 84,000 students in less than two decades? In terms of value proposition, WGU is hard to beat. Annual tuition is approximately $6,000, or $3,000 per semester, making it less expensive than public universities and even some community colleges.

Students can take as many classes as they want, enabling them to knock out a degree on an accelerated timeline, should they so choose. As a result, the most recent graduating class finished their degrees in an average of two years and three months.

Timing also helped: online schools became more common, and the 2000s were the start of growing student enrollments across all sectors of the higher education landscape, from private colleges to the for-profits.

Schools largely struggled to keep pace with the demand, particularly after many students were driven back to school during the recession by the collapsing economy.

State governors also saw a window of opportunity with WGU. In 2010, driven by a need to expand education opportunities to more students, Indiana Governor Mitch Daniels established WGU Indiana, in essence incorporating the private, nonprofit WGU into the state’s public education framework through articulation agreements with community colleges. WGU would complement, rather than compete with, the existing public university and college system.

“(WGU) wasn’t in direct competition with the existing community colleges, and it was really not in competition with the existing institutions, because it was by and large serving that group of students who had some college but had not finished their degree,” recalls Jenkins, who was education policy director to Daniels at the time and later became director of external relations for WGU.

Daniels, who is now the president of Purdue University, a private school in Indiana, recently oversaw Purdue’s purchase of Kaplan University, a for-profit online school. Purdue plans to convert Kaplan into a nonprofit public university for adult learners.

The partnership with WGU Indiana and the five other state affiliations that quickly followed helped WGU strengthen its foothold. With the backing of state governors, WGU gained ever more credibility among students and employers alike. Now WGU has the brand recognition and can rely more on word-of-mouth referrals in some locations to draw in new students, in addition to traditional marketing efforts.

“We have seen in states like Indiana and Washington that we somewhat do rely on the word of mouth, where our brand awareness and our reputation among employers is gaining strength and has gained sufficient strength that our level of marketing is much more muted compared to nationally,” says WGU President Scott Pulsipher.

As far as WGU’s future growth goes, nearly the sky is the limit, according to Pulsipher. “Honestly, mostly my attempt is to work with our teams here to project what demands are going to be and what the profile of that demand is going to shape up to be in the coming year, so we can plan accordingly,” Pulsipher says.

WGU assiduously monitors student outcomes and satisfaction, through internal surveys and other metrics, such as a recent Gallup report.

Continuing to improve its four-year graduation rate, which is now at 49 percent according to institutional data, is an important focus for WGU. Federal data sets the graduation rate at 26 percent, but it only measures first-time, full-time students, who account for a smaller proportion of the overall student body.

While WGU has found a model that works and appears to be poised to continue to grow if current enrollment trends hold steady, there is still plenty of room for other schools to engage with adult learners.

Much institutional and state policy has focused on reaching K-12 students, but there is a growing recognition of the need to reach upwards to adults who never earned degrees, particularly in parts of the country where the population is aging and the traditional college-age population is shrinking.

“There is a tremendous amount of interest at the state level right now around how we serve adults, both at the state policy level, but also at the institutional level,” Jenkins says.

The pool of potential adult learners is substantial. According to a 2017 Lumina Foundation report, “A Stronger Nation,” 16 percent of U.S. residents aged 25-64 have some college experience but no credentials.

For now, Pulsipher says that WGU does not plan to put any caps on its growth. For instance, the school is planning to announce another state affiliate in the fall.

Despite its remarkable success in a time when many schools are grappling with enrollment numbers and future financial viability, it is important to note that WGU is not the be-all, end-all answer for education. WGU is not designed to replicate the mission of the traditional research university, or to provide the sort of experiences that a residential college offers, or to play the role of a social and cultural bellwether that many liberal arts institutions have taken on.

It does, however, raise questions other institutions would do well to consider about processes around accreditation, state responsibility and oversight, financial aid and affordability, and staffing and organizational structure.

“The fact is that WGU is thriving in an environment today that was only barely being imagined when it started 20 years ago,” Kinser says.

Catherine Morris can be reached at cmorris@diverseeducation.