Muñoz Pours His Heart Into Service

Dr. Mike Muñoz has worked all across higher education. In addition to being the current executive dean of counseling and student equity at Rio Hondo College in Whittier, California, he teaches part-time at the University of Southern California. For Muñoz, his work for community colleges is personal.

“I’m willing to put in the extra hours because I know what our students’ stories are, and I see myself in there,” says Muñoz. “This is where my heart is.” 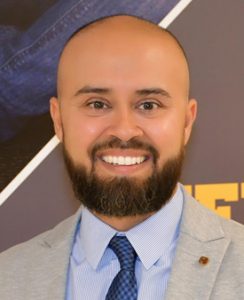 He entered community college as a single father and as a first-generation college student. His academic trajectory was launched soon after.

“I met a counselor who changed my life and illuminated a pathway forward out of a pretty dark place,” he recalls. “I look at where I am right now, and education is a great equalizer.”

Muñoz eventually transferred to the University of California, Irvine, in 2002. From there, he moved on to California State University, Long Beach, where he completed a master’s degree. He then became a member of the first cohort in the university’s doctoral program in education. Muñoz graduated with an Ed.D. in 2010.

He began working at Rio Hondo in 2008, while completing his doctorate. Muñoz currently oversees the Counseling Center, the Transfer Center and the First Year Success Center. Conversations about his work always seem to come back to his equity-centered approach.

“Equity is not about who we serve, it’s about how we serve them. We’re using data to do that,” Muñoz says.

At a community college that is approximately 80 percent Latino, Muñoz, with the help of data analysts, found that Latino men, foster children and military veterans were not experiencing as much success as other groups. In the case of Latino men, Muñoz found that many of them were not moving on to more advanced math courses. His office then took an active approach to understand what was preventing these students from enrolling in and finishing the required class sequences.

He hopes that technology will strengthen the school’s holistic approach to equity. Rio Hondo has implemented a platform called Starfish, created by Hobson, an educational technology company. This system allows faculty and staff to notify the Counseling Center about students who are struggling academically or with homelessness and food security.

Muñoz praises the students at Rio Hondo and their “high aspirational capital.”

“We’re on a hill, so we’re not easy to get to. With public transportation, it’s even harder to get to,” he says. “You have to have a certain drive to come here. You have to make a really conscious decision to come to Rio Hondo.”

However, students’ ambitions do not get in the way of their sense of community, says Muñoz.

“They’re very caring of each other. They want to take care of each other,” he observes. “I know that’s a millennial thing, but it’s on steroids with our population.”

Muñoz sees urgency in his work. “Sometimes I want to move more quickly than the system is ready to respond,” he says.

Despite the challenges of working in the community colleges system, Muñoz is committed to advancing equity at Rio Hondo for the long-term.

“My career aspirations are linked to the community college system,” he says. “I see myself retiring from here in 20-something years.”