The number of both racially and economically segregated schools is growing, as a 2016 report from the Government Accountability Office attests. Between 2000 and 2014, the number of schools predominantly attended by low-income Black or Latino students jumped from 9 to 16 percent. 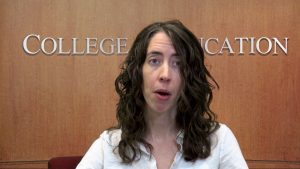 “Policies that incorporate race along with socioeconomic status seem to be the most effective in maintaining racial diversity,” said Dr. Erica Frankenberg, associate professor of education at the Penn State College of Education and author of the brief.

In the aftermath of the landmark Supreme Court case Brown vs. Board of Education, schools were mandated to implement desegregation policies, which proved to be quite effective in integrating classrooms across the nation. Yet as these policies have ended, schools have reverted to previous patterns of segregation.

“Schools are becoming more tightly linked with their neighborhood [demographics] because of the ending of school desegregation plans, particularly in the South,” said Dr. Erica Frankenberg, associate professor of education at the Penn State College of Education.

Creating more diverse K-12 schools has important implications for higher education, Frankenberg said. Students benefit from diverse classrooms, and breaking down racial barriers in K-12 helps prepare students to encounter others from different backgrounds once they get to college.

Kaepernick, Race and the Hypocrisy of the American Public