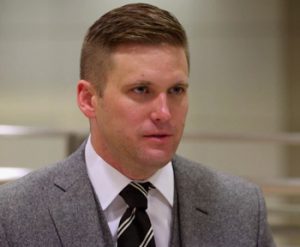 After Penn State denied a request to host Spencer, Cameron Padgett, a Georgia university student organizing Spencer’s speaking tour, filed a federal lawsuit against the university on Thursday. The same day, the University of Florida spent over $600,000 on security to prevent violence in midst of the rallies surrounding the venue of Spencer’s speech.

“Not in our town! Not in our state! We don’t want your Nazi hate!” the protestors chanted outside the UF Phillips Center on Thursday. Hundreds of police officers stood guard, according to an Associated Press report. Meanwhile, officials at Penn State took preventive measures by refusing to rent space to Spencer.

According to the Associated Press, Jordan Rushie, Padgett’s lawyer, argued that a public university’s refusal based on the content of Spencer’s speech is illegal. The AP report states that Penn State’s administration declined to comment on this lawsuit and referred to an August statement from Penn State President Eric Barron.

“Penn State is an institution of higher education, and fully supports the right of free speech and encourages its expression in thoughtful and respectful ways, even when we strongly disagree with the opinions expressed,” Barron said. “But the First Amendment does not require our university to risk imminent violence.”

The University of Florida had also initially rejected Spencer’s request in fear of experiencing the violence that occurred in Charlottesville, Va., last August that resulted in the death of a counter-protestor Heather Heyer. The university eventually gave in following threats of legal action.