When Amy Chua published “The Battle Hymn of the Tiger Mother ” in 2011, a book about how she raised two high-achieving daughters, people took notice. Chua is Chinese American and both daughters were on their way to Harvard, with an impressive roster of activities that included excelling at piano and violin.

Chua described how she built a household run on strict discipline and unyielding, sky-high expectations, what she called traditional Chinese parenting techniques. An excerpt from the book ran in The Wall Street Journal under a blunt headline that made clear the implications, “Why Chinese Mothers Are Superior. ” 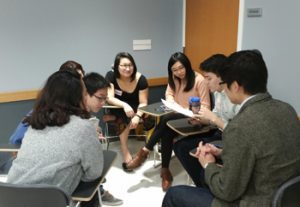 And it wasn’t just the Chinese who were following this thinking. These parenting attitudes are ingrained in many Asian cultures. Chua’s book was viewed as something of a “how to” guide — a peek into ingredients behind the secret sauce of success among many Asian American students. Chua herself was proof that the process worked. Raised by Chinese immigrants, she rose to become a professor at Yale Law School.

But increasing attention is being paid to the flipside of that success.

Margaret Yee, a high school teacher in the San Francisco area, said she sees Asian American students struggle under the weight of expectations. Their parents expect them to excel. And the students expect it of themselves, too.

“It comes with a huge price,” Yee said.

Yee said some Asian students see only one path forward. They must get the best grades. They need to get the highest honors. They have to do all these things to gain acceptance into the most elite colleges, where the whole process starts all over again.

“They don’t feel free to be anything else,” Yee said. “You can be docile and high-achieving, but you can’t have a voice.”

“We were trying to dig down deep a little bit to understand, to pinpoint the particular sources of worry,” said Sumie Okazaki, a professor of counseling psychology in Counseling@NYU’s online masters in school counseling program who co-authored the study. “The main takeaway from the study was that Asian American college students were worried about specific things that are rooted in ethnic and cultural contexts.”

Okazaki said that for many Asian American students that pressure to succeed comes from their parents.

“This is the way the worry gets generated for the students,” Okazaki said. “They face higher standards and the pressure of not living up to the expectations of others.”

One surprising finding of the study was that although Asian American students worried more about school and family expectations, they did not report higher levels of overall anxiety. Other recent research that used data from the Collaborative Psychiatric Epidemiology Studies  have shown that Asian Americans face a lifetime prevalence of generalized anxiety disorder of 2.1 percent, compared to 8.6 percent for White Americans.

“There’s something going on with the connection to having lots of worry but not being totally undone by these worries,” Okazaki said. “And we don’t quite understand that discrepancy yet.”

The interest in what makes Asian American students tick is driven by their impressive achievements. A 2016 Census report found that 54 percent of people who identify as Asian have earned a bachelor’s degree. The next highest group, White people, stood at just 37 percent. And 22 percent of Asians had advanced degrees, compared to 14 percent of Whites.

One potential explanation for this success is that many Asian American students are the children of first- or second-generation immigrants. And these immigrants that made it to America are a self-selecting group that values education.

A 2015 book called “The Asian American Achievement Paradox” attributed this, in part, to immigration policies after 1965 that favored people with more education and professional skills. These driven people had an easier time immigrating to the United States, where they then passed on their values to their children.

“There’s a lot of motivation for parents who are immigrants to provide opportunities to their children,” Okazaki said. “They bring lots of hopes and dreams that are placed onto their kids.”

Yee sees this in some of her Asian American students.

“There is this really acute pressure to succeed because the family has sacrificed so much to come here,” Yee said.

While some students are motivated by their family’s immigration story, some students wither under these pressures — and often are reluctant to reveal what they’re feeling. Yee said some high-achieving students suffer from depression and low self-esteem. But there is a stigma attached to speaking up.

“As long as the students are performing, it’s like nothing is awry,” Yee said.

The “model minority” myth—that Asian American children seem destined for academic and professional success—compounds the problem. These students are placed under enormous pressure to succeed, but also feel they can’t admit they are struggling. And teachers and administrators may overlook Asian American students’ distress and assume that they are doing just fine because of their high achievement

“A lot of the kids I see are not allowed to mess up,” Yee said. “And so when they do, it’s really hard on them.”

Okazaki said she hopes research into the pressures of being a “model minority” will help school counselors as they interface with Asian American students, helping them identify potential sources of worry and seek solutions. Of course the findings cannot be applied in every case. Some students are not overcome by parental expectations. But many are.

The trick is identifying ways to motivate children, help them achieve and succeed, without crushing them with worry. It’s a balancing act — one that all parents struggle with.

“A small amount of academic anxiety can be motivating,” Okazaki said. “It makes you study more because you are worried. But it’s hard to tell how unhappy these worries make them.”

Alexis Anderson is a Digital PR Coordinator covering K-12 education at 2U, Inc. This article was originally posted on the Counseling@NYU blog.