WASHINGTON — A new higher education advocacy group made its public debut Monday with a new federal policy framework and a focus on nontraditional students. 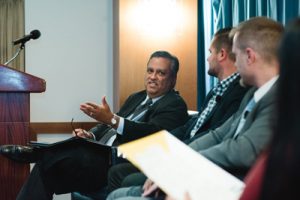 “Overall, our policy framework is governed by the idea that our federal policies are out of date,” said Julie Peller, executive director of the new organization, Higher Learning Advocates based here in the district.

“We want make sure students are first, that we are not leading necessarily with our policies but that our policies are led by the needs of students,” Peller said.

For its first public event — held at the National Press Club — Higher Learning Advocates featured two current students seen as being reflective of “today’s students,” that is, students who are parents, stopped out of college, veterans and the like.

One of the students, John Englehart, a married father of two children, ages 3 and 6, spoke of the financial sacrifice his family has had to make since he returned to school after what ended up being a 10-year hiatus from higher education.

Not a single vacation has the family taken, much to the chagrin of Englehart’s 6-year-old daughter, whom he promised he would take to Disney World after he graduated.

When he got frustrated with his school work and closed his laptop one evening, there she was telling him to “get back to work because you’re gonna graduate and I’m going to Disney World.”

Englehart — a postal worker — says he strives to maintain a discipline of setting aside two hours each evening for his schoolwork at the University of Maryland University College.

“Every excuse I could come up with for not going, they had an answer for that excuse,” Englehart said. Still, Englehart says he is concerned about the “skyrocketing cost of tuition.”

“I’m already up to my eyeballs in debt with a mortgage and two cars,” Englehart said. “What can we do to reduce the cost?”

Cost is one of the key focal areas for Higher Learning Advocates. In its new framework, the organization argues that higher learning must be “affordable and responsive” and recommends a federal “college affordability benchmark.”

Englehart said there needs to be more information about how to gauge colleges. He seemed taken aback when a Diverse writer noted that federal data shows UMUC has a graduation rate of just 10 percent. Despite the low graduation rate, he credited the school with meeting his needs. He has a 4.0 GPA and plans to pursue a master’s degree and potentially go into college advising.

E.J. Delpero, a veteran of the U.S. Navy, said he had a hard time transitioning from Northern Virginia Community College to George Mason University, where he is currently a political communications student in the Class of 2018.

As a former information-systems technician in the U.S. Navy, he thought he was up to the challenge of engineering but says he found it difficult to keep up with the younger students who seemed to grasp the concepts more easily. He says he wishes there would have been more prep for students such as himself who have been out of school for a while as they transition to college life. He also said he struggled with isolation as an older student at GMU.

“It’s really difficult for me to connect with students [who are] right out of high school,” Delpero said. He said peer mentors and cohort groups could be a boon to student veterans like him.

A major question about Higher Learning Advocates is what the group will bring to the discussion that isn’t already there.

One policy insider noted that the organization seems to be making a more deliberate than usual effort to be truly nonpartisan.

For instance, the board is made up of what the insider described as a “decent mix” of individuals that range from Margaret Spellings, president of the University of North Carolina System and former Secretary of Education under President George W. Bush, to Dr. Kim Hunter Reed, executive director of the Colorado Department of Higher Education and former deputy education undersecretary under President Barack Obama — a post in which she led postsecondary diversity and inclusion work as well as the White House Initiative on HBCUs Office.

The source also noted that Higher Learning Advocates seems more focused on the actual learning experience of students, as evidenced from its emphasis on students for its first public event.

Dr. Chris Bustamante, president of Rio Salado College and Maricopa Corporate College, was the lone higher education administrator on Monday’s panel. He said it’s important for college leaders to recognize that the purpose of the institutions they run is to serve students and to help them “make sure their dreams come true,” Bustamante said. “So how do we work together to make sure that happens?”

Peller said Higher Learning Advocates will use its agenda to seek to move higher education away from compliance-based “box checking” and more toward student success. She said innovation and change should not come at the expense of quality.

“You can have both innovation and change and be driving for high quality at the same time,” Peller said. “Our hope is that this is an agenda that is not partisan, not driven by parochial interests but driven by student success.”

National Council of La Raza Changes Its Name to UnidosUS

Gullah Culture ‘Hangs On’ at Weekend Institute in Denver

Student Leader’s Arrest Leads to Protest at University in India