In an effort to showcase and empower first-generation students, the Council for Opportunity in Education (COE) will organize a national celebration on college and university campuses this week.

COE, in partnership with other  higher education organizations, will commemorate the 52nd anniversary of the Higher Education Act of 1965 with a nationwide “First Annual First-Generation College Celebration” on November 8. 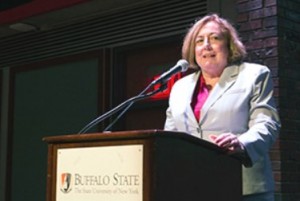 “First-generation students, regardless of their particular backgrounds, face a common set of obstacles on the path to college success,” said Maureen Hoyler, president of COE. “Too often, their efforts are overlooked as they toil away quietly, diligently, all the while juggling school with competing demands, such as work, family, and so on.”

This year’s celebration will not only emphasize the challenges first-generation students face, but also the strengths that they bring to their campuses.

“In launching the First-Generation College Celebration, our goal is to elevate the status of first-generation students on their campuses and recognize their achievements in overcoming such challenges,” Hoyler added.

COE offered a number of suggestions for colleges and universities to partake in the celebration on Wednesday.

Hoyler praised institutions like Princeton University, which she said has been ahead of the wave in organizing first-generation students, an “important step to them getting a voice,” Hoyler said. Just recently, Princeton announced that 22 percent of its incoming freshmen class qualifies for federal Pell Grants.

Planned activities at these schools range from creating a “first-generation registry” to provide resources for students seeking mentors and advisors among campus leadership, to luncheons and cake celebrations, to poster campaigns where students will share what it means to them to be a first-generation student. COE also encourages schools across the country to provide t-shirts and other items to celebrate their students.

The concept of “first-generation” students was first introduced into federal policy by the TRIO community in 1980 during amendments to the Higher Education Act of 1965, according to the COE’s website.

In a recent interview with Diverse, Hoyler explained that COE’s focus on class and socioeconomic status is intentional. People “have a harder time talking about class” she said. By focusing on class, TRIO officials can be unified in their efforts to help low-income or first-generation students in both rural and urban areas, she said.

To date, more than 28,000 TRIO regional programs serve approximately 790,000 low-income students. Two-thirds of the students served come from families making less than $36,450 where both parents do not have a college degree. These programs, however, are under financial threat, as lawmakers have slashed their budgets in recent years.

“If our country is going to be great, you’ve got to maximize on the talent you have,” Hoyler said. “You can’t ignore it.”

Honing in on the “untapped potential” of first-generation and low-income students, Hoyler said that this group of students should be given the opportunity to dream and have access to a secondary education. “Enrollment is not the goal, access is,” she said.

Hoyler said challenges of access and opportunity for low-income and first-generation students often get overlooked because people with knowledge and solutions “are not invited to the table,” she said. She hopes to change that and confront what she sees as a continuing disinvestment in higher education.

“TRIO is seen as a service,” she said, “but it’s a set of individual human beings helping other human beings. They are genuinely committed to solving problems.”

In preparation for the First Annual First-Generation College Celebration, COE invites students and institutions to share their plans on social media using the hashtag #celebratefirstgen.

The State of Retention

Best & Brightest: Finishing College “Something I Have to Do”