According to a study published last week by The Education Trust, the gaps in graduation rates between White and Latino college students have persisted.

The report, titled “A Look at Latino Student Success: Identifying Top- and Bottom-Performing Institutions,” lists the colleges and universities that have been able to address this gap as well as those where the disparity is still strong. Those institutions that have managed to reduce or eliminate the disparity on their campuses say leadership and a holistic approach are key.

Dr. Andrew Nichols, author of the report, said the goal was to “try to bust the myth that an institution’s graduation rate is a byproduct of the students they enroll, that if you enroll students who are well prepared, you’re going to have high graduation rates, and if you’re unable to do that you’re just stuck with bad graduation rates.” 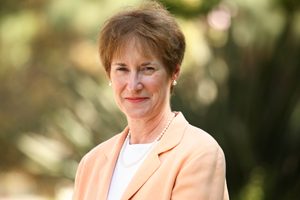 Dr. Sharon Herzberger is the president of Whittier College

The data used by the report shows variance in Latino student success at four-year universities. It argues that while students’ differing backgrounds and academic performances play a role in this variance, the institutional culture can also impact student outcomes. Nichols proved this explicitly by comparing institutions that were similar except in their differing successes with closing the gap in graduation rates. He explained that he used over ten variables to compare colleges and universities as well as their student bodies.

For example, California State University, Fullerton, and the University of Texas at San Antonio share commonalities in areas such as average SAT scores, percentage of students receiving Pell Grants and the percentage of Latino students. However, the graduation rate reported for Latino students at Fullerton was nearly nine points higher than the rate for their White classmates. On the other hand, White students had an almost six-point lead at San Antonio.

The report’s appendix lists both the highest and lowest performing institutions using data from 2013 to 2015.

At the top of the list of high performers is Whittier College, which has been a Hispanic-serving institution since the designation was created in 1965.

“What we learned from many years of trying to reduce these disparities is that you’ve got to start with a good critical mass,” said Dr. Sharon Herzberger, president of Whittier. “If you don’t have that, you’re already at a disadvantage.”

The Education Trust’s report emphasizes the need to have a substantial population where Latino students can thrive. Herzberger said that with over 40 percent of students being Latino, Whittier provides a welcoming environment for incoming students.

While Southern California’s high Latino populations may explain these numbers, the numbers in the region’s comparable private colleges pale in comparison. Whittier’s smaller class sizes and supportive faculty build on this foundation of a “critical mass.”

“I think there’s a difference between a Latino-enrolling campus and a Latino-thriving campus,” said Dr. Douglas Haynes, UCI vice provost of academic equity, diversity and inclusion. “The difference is intentionality.”

Across the country at the University of South Florida, the best performing public university listed in the report has found success in strong leadership.

“We point to this change of institutional culture enforced repeatedly by the president, the provost and even our board of trustees as the difference maker,” said Dr. Paul Dosal, USF vice president of student affairs and student success at the university. “There is no silver bullet. There is not one program or practice that will make the difference.”

For Dosal, the university’s SMART Lab program is just one example of how success of Latino students is just one fortunate byproduct of a greater mission. While designed as a broader approach to increasing student success in remedial coursework, the program has benefited Latino students because of the closer faculty supervision and mentoring, Dosal said.

Additionally, he pointed out that setting goals and keeping administrators accountable has resulted in double-digit jumps in retention and six-year graduation rates. Nichols and administrators from other universities that have also been able to close the gap in graduation rates, echoed the importance of accountability and tracking student success.

“If you did a survey and asked a handful of institutions what they’re doing, a lot of them are gonna say the same thing,” said Nichols. He listed advising, summer bridge programs and cocurricular activities as the typical list of equity initiatives. “But what they can’t all tell you is how well all those things work.”

On the opposite end of the spectrum, Mercy College was listed as having the highest gap between White and Latino graduation rates. Administrators at the college, however, argued that the use of older data misrepresented their efforts.

“Ten years or so ago, we weren’t doing very much,” said Dr. Timothy Hall, president of the New York college. He said that the students graduating between 2013 to 2015 were not exposed to the initiatives currently in place at Mercy. “Today we’re doing all sorts of things.”

According to Hall and Mercy College Provost Dr. Jose Herrera, graduation rates for Latino students increased by ten percent since 2015. According to their data, in 2017 the gap has narrowed to 14.3 percent from the earlier figure of 22.4 percent reported by The Education Trust.

Whether they’re from Whittier or Mercy, administrators agreed that there is still work to be done.

“We think there are things that institutions can do that make a difference in the possibilities for student success, and we’re trying to do that,” said Hall. “We believe with The Education Trust that graduation ought not to be a matter of demographic destiny.”