Dr. Harry Williams is known among peers for his focused, successful, low-key approach to tough challenges.

Today, his peers say the firepower and tenacity of the 53-year-old is being put to the test as he begins his new post earlier this week as a top national advocate for an endangered higher education asset: public historically Black colleges and universities (HBCUs). 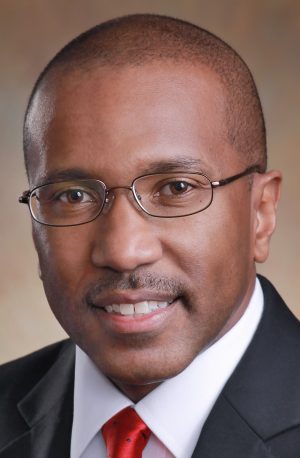 Williams is the new president and chief executive officer of the Thurgood Marshall College Fund (TMCF), making him the fund’s third chief officer since its founding in 1987 and the first college president to hold the position. TMCF has raised more than $250 million to aid some 47 public historically Black colleges and universities.

For sure, Williams acknowledged in a recent interview, TMCF faces increasingly high hurdles in helping its 47 targeted institutions and their students. The list of challenges is long, beginning with nose-diving minority enrollment at HBCUs, fragile funding at most of the institutions and churning leadership. More than half of the TMCF targeted institutions have changed presidents in the nearly eight years Williams was head of Delaware State University.

In Washington, where TMCF is based, the changes in leadership at the White House, in the Department of Education and in the House and Senate have raised the stakes for higher education as strong bipartisan support for it has diminished after decades. HBCUs are also increasingly being challenged by a growing number of policy thinkers and makers who know little about HBCUs, their history or their role in education, adding a degree of extra frustration to those who are making efforts to sustain public support for this group of institutions.

“When I started as president [at Delaware State], it was all hands on deck,” William says, reflecting on the challenges facing higher education and Delaware State at the time. “That’s what we’re looking at now [at TMCF],” he says, asserting he understands as an immediate past president how things have changed. “There is a sense of urgency” for HBCUs, he says, adding he plans to “continue to move forward” with TMCF’s “strong advocacy” agenda that his predecessor, Johnny Taylor, established during his tenure as chief executive.

“We’ve got to look innovative and create ways to attract more students to our institutions,” says Williams. He says HBCUs are in a “transition phase.”

Putting his awareness of the political and economic environment of the last decade to work every day at Delaware State helps explain his institution’s ability to weather the state’s and the nation’s economic downturn and spotty rebound in the last decade, says Williams. He and his team have worked through state budget cuts, reducing programs as needed, boosting international student enrollment, and they have managed to sustain and increase overall enrollment and retention in recent years.

Delaware State’s 4,000 plus enrollment numbers include 250 international students living on campus and 250 full-time students living in China, where they are earning degrees in accounting and management.

Williams, an ardent supporter of federal TRIO programs for needy college students and ‘dreamer’ students who risk being ordered out of the country for lack of legal papers, has big goals for the TMCF. They are rooted, he says, in the success of TMCF work he has seen as a university president when all participants are on the same page.

Reaching those goals won’t be easy, he and his peers, mentors and others say.

“You’re going to have to spend some time convincing Black parents and students HBCUs are still there and doing good work,” says veteran higher education executive Dr. Frank G. Pogue Jr., president of three institutions, who has also served in administrative positions at the State University of New York system for two decades.

Pogue, who counts himself among the peers and mentors of Williams, says the former Delaware State leader needs to make sure he understands each TMCF targeted institution has a character of its own. He then needs to figure out a simple marketing message to potential supporters that embraces and celebrates these differences. Each institution also has challenges of its own, he says, stemming from oversight boards to governors and state lawmakers and into this mix can be added the folks in corporate America and Washington.

“The more you know about your institutions, the better,” says Pogue. “You’ve got to package it to tell one single story,” he says. “All HBCUs have more in common [with each other] than historically White institutions,” Pogue says, despite practices by more than a handful of HBCUs to distinguish themselves from one another.

“You’ve got to have the staff necessary to present your case factually, not fake news,” says Pogue, adding it is no secret that most HBCUs “are underfunded” and don’t have the technology needed to function effectively.

The institutions, meanwhile, need to do smart things to maintain enrollment, he says, and the welfare of the institutions requires it. At Delaware State, Williams and his team have seen enrollment increases in seven of the past eight years, according to the university’s census records.

Historically White institutions have been aggressively pursuing Black students for more than 20 years, says Pogue, discussing Williams’ challenges trying to keep TMCF targeted institutions competitive. Historically White institutions “increasingly are going to be more aggressive in recruiting Black students” and other minorities, as White enrollment overall continues to decline, says Pogue, who is a graduate of an HBCU. He spent most of his career leading diversity efforts in the SUNY system and worked for a decade as president of Edinboro University of Pennsylvania and helped run several other institutions briefly before retiring recently.

Williams grew up in Greenville, North Carolina, and graduated from high school there. At age 18, he was recruited by University of North Carolina at Asheville and was nurtured through its TRIO program, the federal program for poor and first-generation college students. Since those early days, he has been impressing teachers and later colleagues at every turn. After earning his doctoral degree from East Tennessee State University, he began climbing the leadership ladder in the University of North Carolina system.

The second youngest of eight children raised in a one-parent family by his mom, Williams is recognized and admired for his sensitivity, humility and ability to communicate his concern for the welfare of others.

In his new national job, Williams, selected from a pool of approximately 200 applicants, will need to employ that wealth of skills and more, say those familiar with the work of HBCU advocates in Washington.

“Give him a couple of months, and he’ll be okay,” says Pogue, adding, “He’s a strong academic, has been strong in raising money.” Pogue acknowledges that raising money is the fund’s principal mission.

Indeed, exiting chief executive Taylor succeeded in helping the fund significantly boost financial support for HBCUs from wealthy individuals, with targeted goals to help students and institutions. It now generates more than $15 million a year to support programs, research and students at the HBCUs it is trying to help.

TMCF had high expectations of the nation’s new leader, especially when President Trump hosted a group of HBCU presidents this past winter for a photo opportunity and for the chance for key new White House and Department of Education staffers to tap the higher education leaders’ thoughts on how the new administration can help them.

Many university chiefs expressed disappointment over the absence of prompt, decisive White House action after their two-day sessions with Trump and his aides, followed by notable silence in subsequent months.

Williams, who was among the dozens of peers who participated in the meetings, kept a low profile during the sessions.

Some signals have been sent from the administration that several important items may get a favorable nod on some little items as the administration makes large-scale budget and policy plans. Major gestures that can help HBCUs, however, got no major attention in 2017. Williams says he is not ready yet to throw in the towel.

“We are neutral when it comes to working with the administration,” says Williams, adding there is time for the Trump team to address HBCUs’ wish list for a variety of aid.