New York Governor Andrew M. Cuomo will introduce legislation this year that would require all State University and City University of New York system schools to establish food pantries or other “stigma-free” arrangements for food-insecure students to have access to food.

On December 28, Gov. Cuomo’s office unveiled his “No Student Goes Hungry” program, as part of a series of proposals leading up to his 2018 State of the State address held on Wednesday. The “comprehensive” food security initiative will provide “students of all ages, backgrounds and financial situations access to healthy, locally-sourced meals from kindergarten through college.” 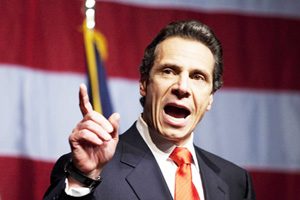 “No child should ever go hungry, and by launching the No Student Goes Hungry Program, New York will ensure hundreds of thousands of students of all ages will receive access to free and reduced-price meals, Cuomo said in a statement. “This program is essential to the success of future New York leaders and this administration remains committed to removing barriers to healthy food options, while providing a supportive, effective learning environment for students across this great state.”

Currently, the governor’s office says that only half of public state campuses have a food pantry in place. If the legislation passes, New York State will be the first state that requires all public campuses to have a physical food pantry or other “stigma-free” arrangements for students to receive food such as through partnerships with outside food banks, for example. Cuomo has proposed a $1 million state investment for SUNY and CUNY institutions to create a food pantry on their respective campuses.

Public health and food security advocates welcome the governor’s plan as a first step to eradicating hunger for student across the state. Research shows that food insecurity is associated with lower grades, higher rates of absenteeism, low retention rates and hinders a students’ ability to focus. Further, a “Hunger on Campus” report found that 55 percent of respondents that were affected by food insecurity did not have the means to buy a textbook.

“It is commonsense that being hungry or malnourished makes it difficult to learn – we know this is true in elementary school and it remains true in college,” said Dr. Sara Goldrick-Rab, a professor of Higher Education Policy and Sociology at Temple University.

Goldrick-Rab said that she is glad that Cuomo has recognized food insecurity as an issue and has proposed creating food pantries as an initial start to address the problem. However, she warns that food pantries are “stopgap measures – band aids – not solutions” entirely.

Dr. Nicholas Freudenberg, distinguished professor of Public Health at CUNY and director of the CUNY Urban Food Policy Institute, said that, at a fundamental level, food insecurity is a “symptom of poverty.”

Freudenberg said that while food pantries are a good start, they still depend on charity and the disbursement of food in a “fairly episodic way” to feed people who are hungry. If a student goes home on the weekends or during the summer to a family that is food insecure, he said that school officials must work towards the goal of ending hunger during those times as well.

For now, though, Goldrick-Rab said that she believes Cuomo’s effort will be successful if it includes four key ingredients: a push for all colleges, including private colleges, to be involved; annual surveys and systematic data collection on food insecurity among New York State’s college students; incentives for colleges to form working groups and task forces to examine food insecurity on campus and the best ways to address it; and incentives that go beyond food pantries.

Additional efforts for reducing food insecurity might also include colleges and universities using the standard 10-item food insecurity module from the U.S. Department of Agriculture in their surveys to review the extent of food insecurity at the campus over time. Schools can also increase access to SNAP (federal food stamps), utilize the Swipe Out Hunger program for students to eat on campus, and provide emergency aid to fill in gaps from “unwieldy existing financial aid programs,” Goldrick-Rab said.

Freudenberg’s Urban Food Policy Institute has already conducted surveys to get an estimate of how many CUNY students are affected by food insecurity in various categories in an effort to address the problem. Dr. Kristina M. Johnson, Chancellor of SUNY, said that nearly 70 percent of SUNY campuses already have food pantries on site or through community partnerships such as community gardens, emergency food vouchers, dining center meal donations and other programs.

As efforts to eliminate food insecurity extend throughout New York State’s education institutions, public health experts argue that there is a need to focus on the kinds of foods students are eating so that they won’t develop diet-related problems, obesity or diabetes.

“It’s not simply having enough quantity of food, we also need to be concerned about the quality of food,” Freudenberg said. “If we set up a system of food pantries, it needs to be a system that provides healthy food, not candy or soda or junk food.”