For more than three decades, Lester— who graduated from Fisk University in 1960 — taught at the University of Massachusetts, Amherst, where he developed a national following.

In the 1960s, he worked as a photographer for the Student Nonviolent Coordinating Committee (SNCC) after spending some time as a musician, and in 1971 he became a professor of Afro-American studies at UMass. After he publicly accused author James Baldwin  of anti-Semitism, he was pushed out of the department and later joined the Judaic and Near Eastern Studies Department and taught courses there and in the English and History departments until his retirement in 2004. 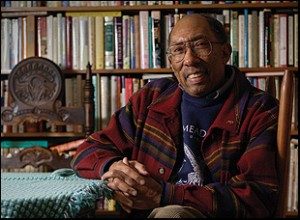 Controversial at times, Lester himself was once accused of anti-Semitism for his decision to allow Leslie Campbell — a Black New York City teacher— to appear on his talk show on WBAI in New York in 1968 and read a poem that many felt was anti-Semitic.

This occurred during the contentious showdown in the Ocean Hill-Brownsville section of Brooklyn, where there was a battle over local control of public schools at a time when most teachers in the predominantly Black neighborhood were Jewish.

“UMass is deeply saddened to learn of the passing of Professor Julius Lester, who enriched our university community and the world as a teacher, scholar and writer,” the university said in a statement. “We cherish his many enduring contributions to our lives and extend our heartfelt sympathies to his family.”