Emerging Scholar Profile: Curry and the Relevance of Philosophy 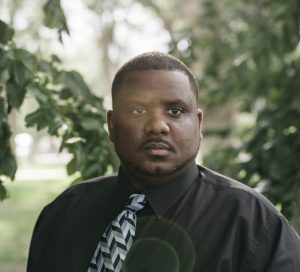 Having grown up in a working-class family in Lake Charles, La., Dr. Tommy Curry is no stranger to intellectual adversity.

When he joined his high school debate team at the age of 12, he began reading works by Frantz Fanon and Derrick Bell. He recalls how his fellow debaters resisted his employment of critical race theory at local competitions.

Now, as a young tenured faculty member, he is one of the few scholars researching critical race theory at Texas A&M’s philosophy department. During his rise from assistant professor to full professor within six years, the lessons he learned as a young debater have remained relevant.

“I was drawn to debate because I loved the idea that you can speak quickly and that you can do research and that you would be judged on what you know instead of your skin color,” Curry says. “As a Black kid growing up in Lake Charles, Louisiana, where everything’s about race, it was refreshing to think, even as naïve and idealistic as it may be, that there’s somebody who would value what I said because I made a good argument and not because of how I looked.”

That vision of philosophical discourse was tested for Curry in July when comments he made about the film Django Unchained were taken out of the context of a larger discussion about gun ownership by Black people and interpreted as a call for violence against White people. He received violent threats via email and social media. For Curry, this incident mirrored a problem that often occurs in academia, that is, the inclination toward identity politics, as opposed to rigorously addressing the issues.

Curry published his first book, titled, The Man-Not: Race, Class, Genre, and the Dilemmas of Black Manhood, in July 2017. His work uses social and political philosophy to study Black masculinities. Unlike the norm in academic philosophy, Curry relies heavily on facts and historical context to substantiate his ideas, he says.

“For me, any time you look at a philosophical problem, you have to understand the history, or what happened beforehand, because that gives you complexities involved in the problem that you’re trying to study, as well as what’s going on with the problem right now,” he says. “Once you have that, then you can start thinking abstractly or doing philosophy.”

Curry has acknowledged that, although an Africana or African-American studies department may be a better fit than what he calls the sterilized discipline of philosophy, he is not shying away from academic adversity.

“My mom used to tell me, take everything they have, learn what you have to learn and use it against them,’” he says. “My view of education was already introduced to me as a hostile engagement with White people’s racism because that’s the time I grew up in.”

Both his intellectual fortitude and commitment to social justice have earned him the praise of his peers.

“Anyone that’s in Tommy’s presence for more than two seconds will immediately pick up on the fact that he is the quintessential scholar,” says Dr. Fred Bonner, a professor at Prairie View A&M University, who worked with Curry as a peer mentor at Texas A&M. Bonner describes his former colleague as a “tier-one scholar,” who is “unapologetic about telling the story of underserved and underrepresented populations.”

In the classroom, Curry helps his students navigate concrete phenomena rather than allowing social media trends and slogans to dictate his teaching.

For Curry, philosophy is about bridging the gap between thought and social change. He hopes to continue to bring this idea to life in both his research and his teaching.

“I think all philosophy should lead to some sort of activism because if philosophy is serious about changing the world, then the only way the world changes is through policy or activity that causes transformation,” he says. “So when I talk to the students, I’m interested in them assessing the role that they play. What does their existence mean within the context of these oppressive structures?”

Words of wisdom/advice for new faculty members: Write with the courage that history will remember your name even if those in your time do not and [with] the knowledge that any attempt to challenge racism under the current political regime requires the belief that facts can and do triumph over ideology, even if it is beyond our own lifetime.