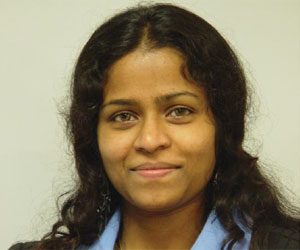 Growing up in South India, Dr. Padmaja “Paddy” Guggilla had an acute sense of the importance of education.

“We were lower middle-class, with not too much money,” she said.

Although her father completed only 10th grade, and her mother made it only to the sixth, the couple insisted that Guggilla and her three siblings go on to earn college degrees.

“My mother always told me that education and financial freedom is the most important thing,” said Guggilla, an associate professor of physics in the Department of Physics, Chemistry and Math at Alabama A&M University.

Arriving in the United States in 2000 to complete her master’s degree in engineering from the University of Alabama, Huntsville, Guggilla initially thought she would return to India. Instead, she stayed and earned a Ph.D in applied physics from the university that she now calls her employer.

“When I was in India, I was not really aware of Alabama, but alphabetically it came first, so I came here,” she said with a laugh. She completed her doctorate from Alabama A&M in 2007 and joined the faculty a year later, after a teaching stint as an adjunct professor at J.F. Drake State Community and Technical College.

“I was always very good at sciences in India,” she said. “In India, because of the huge population, you have to be in the top 1 percent and be very top-notch.”

Although higher education was not initially part of her plans, she said that as a child she always enjoyed giving talks and presentations and knew she had a natural gift for educating others.

Now, in her 10th year at Alabama A&M, she said she enjoys working with students — many of whom come from low-income backgrounds and are first-generation college students like herself.

“Actually, it’s been very motivating to help bring about change and to motivate my students in the right direction and to help them learn better,” she says. “I always see myself as a driving agent, which is why I chose teaching.”

Still, Guggilla admitted that there have been challenges, adding that a number of her students have so many financial and personal concerns that they’re often distracted from doing well in the classroom.

“We have to help them be prepared for college and beyond,” she said. “We have to nurture them, and it makes me feel so good when they come back years later and tell me that I’ve had an impact.”

Despite a heavy teaching load — “I teach 5 courses, very seldom do I teach 4,” she said — Guggilla has maintained a robust research agenda, cranking out articles and book chapters at an accelerated pace.

Her ambitious scholarly pursuits have not impacted her performance in the classroom. Last year, AAMU gave her the “Professor of the Year Award” for overall excellence in teaching, research and service.

In addition, Guggilla has been successful in writing grants, securing over $3 million in funding and is frequently asked to give technical talks at various international conferences. Her research interests include pyroelectric materials, infrared sensors, crystal growth, thin film and thick film technology, composite films and photovoltaic devices.

“I work 200 percent, even coming in to the lab on Saturdays and Sundays,” she said, adding that she has applied for tenure. “I do enjoy my work. It is very meaningful to me.”

Words of wisdom/advice for new faculty members: There is no substitute for hard work. You have to do the hard work in order to be successful.

Column: Amid Abuses, College Sports Sometimes Gets it Right