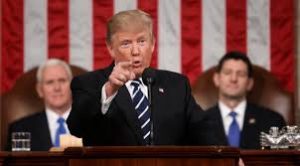 President Donald J. Trump delivered his first State of the Union address since taking office, calling the current era “our new American moment.” But he missed an opportunity for substantive conversation on the growing concerns around education in the country, some in higher education observed.

While Trump’s Tuesday night address touched on Congress’ progress on tax reform, the economy, national defense and the president’s four-pillar policy proposal on immigration, higher education scholars and policy experts noted that there was little mention of K-12 and higher education policy beyond an appeal for an investment in workforce development through the opening of vocational schools.

“The biggest surprise last night was that there was no mention at all of school choice and charter schools, which is kind of the favorite topic of the president and of the [U.S. Education] Secretary and really of the Republican Party, more generally,” said Dr. Jon Valant, a fellow in the Brown Center on Education Policy at the Brookings Institution.

However, the mention of vocational education in the president’s address was “significant,” Valant said, as Congress is working to reauthorize the Carl D. Perkins Vocational and Technical Education Act. The House passed a bipartisan bill last year that floundered in the Senate. However, Valant said, “lately there have been signs that both parties have been willing to do something.”

“America must do better to prepare our students for success in the 21st-century economy,” DeVos said in a press statement. “I join the president in calling on Congress to act in the best interest of students and expand access to more education pathways.”

Some education leaders said they would have liked for the president to have delved into issues of college affordability and access, accountability and protections for student borrowers and ways to increase college completion.

“We would have loved to have seen the president address what we’re doing to increase [degree] attainment and close those [equity] gaps,” said Dr. Wil Del Pilar, vice president of higher education policy and practice at the Education Trust. “Starting college isn’t enough. It only means something if you finish and if you obtain that credential.”

“We should be focused on increasing access and success, not decreasing them for low-income students and students of color,” Pilar added. “The rhetoric and questioning of the value of higher education is troubling, especially given the data that we see.”

Regarding Trump’s emphasis on vocational schools, Pilar said that “while that’s a viable pathway for some students, we know that the greatest gains are at the bachelor’s degree level or higher.” At the Education Trust, education leaders hold to the mantra that “education is the surest path to the American dream,” Pilar said.

“We can’t expect for us to create different pathways for different citizens based on socioeconomic status,” he said about offering low-income students vocational training only. “Why can’t they have a pathway to a bachelor’s degree and to a different life? A middle-class lifestyle?”

Other issues Pilar said the president could have addressed included more support for Pell Grant preservation, the simplification of the FAFSA and ways to align investments in postsecondary spaces so that “completion is equitable.”

“Given the assault that we’ve seen on the American Dream and higher education … these are parts of the conversation that could have been lifted up that weren’t a part of that discussion at all yesterday,” Pilar said.

As the president’s address segued to the issue of immigration, there were concerns that new legislation on the Deferred Action for Childhood Arrivals (DACA) program would leave many so-called dreamer students vulnerable to deportation.

Further, rhetoric promoting increased immigration enforcement and reduction of overall legal immigration into the country overshadowed efforts to help DACA recipients, some of whom are teachers and graduating students.

“I do think that the State of the Union address did not calm any tensions by invoking MS-13 and the horrible case in Long Island,” said Kevin R. Johnson, dean and Mabie-Apallas Professor of Public Interest Law and Chicana/o Studies at UC Davis School of Law. “Not all immigrants are criminals and the crimes, which are being prosecuted, should not be permitted to frame the nation’s immigration policy.”

Johnson added, “This is a very difficult issue that requires deliberation, dialogue and discussion.”