When she was in graduate school, Spoonhunter, who grew up on the Blackfeet Indian Reservation in Montana, where her family are ranchers, spoke at a think tank held at Harvard University around conservation. She shared a story her aunt told her about how before the tribe starts a ceremony they call on all the elements of the Earth. The last ones to enter the lodge are the humans. 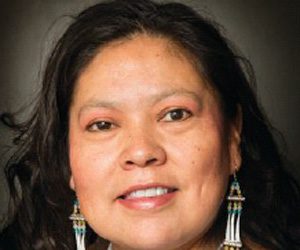 “I told them, ‘If you let the elders tell you a story, you would see how everything is connected,’” Spoonhunter says. “As Blackfeet people, we say the sharing of knowledge never ends.

“I don’t care if my research benefi ts me. I’d rather see it benefit the tribe rather than build my own résumé.”

Spoonhunter’s family was something of an anomaly on the reservation in that everyone pursued higher education. Both parents earned bachelor’s degrees in education and later master’s degrees, even as they held on to the traditional way of life.

“When I went to college, I already had in my mind that whatever I did, I wanted it to help my people,” Spoonhunter says. “Every paper I wrote basically was about the Blackfeet people or about Indians in general.”

She earned a master’s degree at the University of Arizona so that she had sufficient credentials to teach at Blackfeet Community College on the reservation. After she had taught there for several years, family members encouraged her to pursue a doctorate, and she returned to Arizona.

Those years were challenging because she was raising three children and working fulltime while pursuing doctoral studies, but she persevered. When it came time to write her doctoral thesis, which focuses on the lands her tribe historically inhabited and on which their cultural practices are rooted, she was clear that she wanted to use plain language because she wanted the document to be of use to the members of her tribe.

She presented her dissertation, “Blackfoot Confederacy Keepers of the Rocky Mountains,” to the tribal council. To this day, they use the information, including in an upcoming challenge to the National Park Service’s “let it burn” policy, which allows natural fires to run their course. Today, Spoonhunter is a professor of American Indian Studies at Central Wyoming College, a community college. She and her children live on the nearby Wind River Indian Reservation.

She teaches five courses per semester as well as online courses, including American Indians in Contemporary Society, Federal Indian Law Policy and History of the U.S. West. There are some Native Americans among her students, and others take her courses to fulfill diversity components.

“As Native people we realize that we’re only part of the Earth,” she says. “If it weren’t for the animals, the plants and the landscape we wouldn’t have survived.

The packed course load does not leave her much time for research, but she’s trying to expose students on the Wind River Reservation to mentors in health care.

She wants to see Native Americans reclaim their histories and languages, which can help build self-esteem and motivate them to continue their educations. Spoonhunter is working on building a partnership between Central Wyoming College and the University of Wyoming to create a reservation based bachelor’s program.

Mark H. Nordeen, dean of arts and sciences at Central Wyoming College, says Spoonhunter’s work is “exciting and transformational” and adds, “It empowers First Nation cultures by reinforcing visions of successful tribal models, and it gives further inspiration for tribal members to see themselves in successful roles in movements of resilience.”

Spoonhunter notes that 25 percent of the natural resources of the United States lie within Indian territories, and it is therefore important for everyone to be educated, have conversations and build partnerships.

An example she gives is the Dinwoody Glacier, one of the primary water sources for the Wind River Reservation, which is actually the headwaters for the Missouri River. It is crucial to the U.S. as a whole, but never once had researchers sat down with people from the reservation.

“I began this tribal leadership speaker series, and we introduced our tribal water board to the researchers,” says Spoonhunter. “We had a night where they both presented their issues, and from that day forward, they’ve been trying to build on how they can collaborate and how knowledge and research can be shared.”

Words of wisdom/advice for new faculty members: You have to enjoy teaching and be passionate about it. Also, find a good support system.