From the beginning, Dr. Pareena G. Lawrence set out to empower women and defy limitations set for them, especially in the gendered society of her home country, India.

Her experience at an all-girls high school was life-changing, and it was here, Lawrence recalls, that she found her voice and the confidence “that one needs to do the work that we’re called to do.” 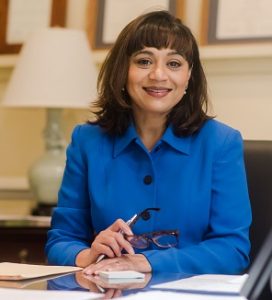 “Medicine didn’t speak to me,” Lawrence adds. “Economics did.”

Now, Lawrence has brought her combined economic training and understanding of the power of sisterhood, allies and friends to Hollins University in Roanoke, Va., where she is the first minority woman to serve as president of the all-women’s institution in its 175-year history.

“I understood how important that [all-girls school] preparation was for me, and I wanted to make sure that I was part of that for our next generation,” she says. She adds that these institutions do not shield women but equip and prepare them “to enter into a world that is very patriarchal.”

“The ethos at Hollins is, ‘Of course, you can do it! There’s nothing stopping you,’” says Lawrence. “That’s the approach we want the students to leave with, that nothing is impossible for a Hollins woman. We band together. We help each other figure it out. There’s a sense of fierce independence, but also this solidarity.”

Lawrence believes her economics background will prove to be instrumental in helping her complete her tasks as president — planning budgets, forecasting the future of the institution and dismantling systems on campus that may be detrimental to students while promoting those that prove helpful.

“I was always a policy economist, so making a difference was always a part of what I was all about,” Lawrence says. “I see that translating really well as I do my job here.”

As one of 37 women’s colleges in the United States, Hollins has played a “tremendous role” [AB1] in preparing its students for the workforce and for public citizenship, Lawrence says. Students are encouraged to make a difference in the world in their spheres of influence and use their education to improve themselves and their communities.

“Our mission is to provide a foundation where our students grow and are transformed and want to lead a life of consequence,” Lawrence says. “Understanding social responsibility is something very dear to me.”

Likewise, college access is important for Lawrence. While the institution does not have a significant endowment, institutional leaders work to ensure that students “who are well prepared are not turned away,” Lawrence says.

Currently, 43 percent of Hollins students are Pell recipients or Pell-eligible. Last year, the institution launched a Global Commitment Scholarship, which provides five full-tuition scholarships to women across the globe with high need who want a Hollins education. A similar scholarship initiative is in the works for women in the local community.

A champion for all women, Lawrence has documented the expansive role that women play in international economic development and co-authored a book titled Life Histories of Women Panchayat Sarpanches from Haryana, India, about 10 women leaders and their impact on their communities.

As the 12th president of Hollins, she is working to make sure that her campus is inclusive for every student. She works from the understanding that all students “need a similar sense of belonging” and warns against institutions privileging “some and then ask[ing] the rest to just assimilate,” she says. “We are role models of what society should look like, and so we need to make sure that we embrace the diversity of our student body.”

At the 2018 annual meeting of the Association of American Colleges and Universities, Lawrence gave a compelling keynote speech about when institutional values of fostering diversity and inclusion and protecting free speech collide. She emphasized that institutions must do better at creating a climate of belonging on campus and care where students can simultaneously engage in civic debate on issues they are passionate about.

“There must be a balance between support and challenge,” Lawrence says. “It takes patience, calm and perseverance to merge free speech and inclusivity. We can do this. … We must do this.”