A report from the University of Southern California Race and Equity Center spotlights the pervasive disparities between graduation rates for Black male student-athletes, student-athletes in general and Black undergraduate men overall.

In a study released on Sunday titled “Black Male Student-Athletes and Racial Inequities in NCAA Division I College Sports,” Dr. Shaun R. Harper examines data from the 65 universities that comprise the Power Five conferences in Division I intercollegiate athletics. As was discovered in other reports, center founder and executive director Harper identified racial inequities in six-year graduation rates and noted that institutional leaders, the NCAA and conference commissioners have done little in response. 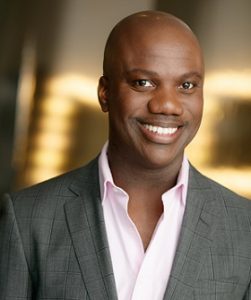 “The durability of these inequities doesn’t surprise me,” said Harper, who also serves as the Clifford and Betty Allen Chair in Urban Leadership and Provost Professor in the Rossier School of Education and Marshall School of Business at USC. “Simply knowing they exist is only half the battle. Doing something about them is the more important imperative, and it is very clear to me that colleges and universities, especially the athletics departments, don’t have strategies for dealing with and correcting these racial inequities.’

Beyond strategy, he added, “we also have to see these young men as people, not just as revenue-generators or as property for the institution.”

Harper wrote that he is astonished that the American public, which includes current and former Black student-athletes, journalists and Black communities, seem to accept the racial inequities as normal. With this report, he endeavored to create greater awareness of the extent to which college sports persistently disadvantage Black male student-athletes.

The report is based on statistics from the NCAA Federal Graduation Rates Database. One limitation is that those numbers do not account for transfer students.

Black male student-athlete graduation rates have declined at 40 percent of the universities over the last two years.

“It needs to be a part of an athletics department strategy to look at places that are performing exceptionally well and places that have experienced significant increases and improvements, and figure out what these places are doing and what we can learn from them that is replicable,” said Harper. 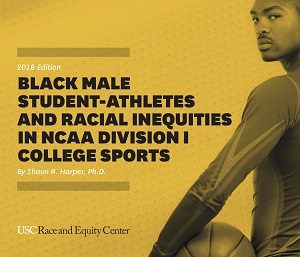 “It is important for the student-athletes to have role models of their same race,” said Harper, adding that how Black coaches and athletic directors treat Black male student-athletes on academic issues should be studied.

Harper offered recommendations for improving racial equity. In an interview with Diverse, he noted that the USC provost has a faculty oversight committee on athletic academic affairs. The panel looks at data on courses in which student-athletes are enrolled to ensure that they’re not being funneled to majors that may not develop long-term career prospects.

“You have to involve the faculty in ways like we’re doing here,” Harper said. “Another thing. I think that at every level — the NCAA, the conference level in each of the Power Five conferences and at every university — there should be a racial equity task force in athletics that not only examines these issues, but also works on creating a strategic plan of action to address these inequities.”

The report issued a call to action for journalists to make the story a priority. That would include pointing out the inequities, showcasing Black male student-athletes who are thriving academically and athletically and analyzing in detail the resources provided by the athletic department.

“Those insights could be really useful, but we don’t tend to ask those kinds of questions in the media or in research,” Harper said. “Asking questions of those who are succeeding could be incredibly instructive.”

He offered a final recommendation.

“Create a database for prospective student-athletes and their parents so they can identify universities that prioritize education and graduation so they can be mindful in their choices.”