A mentoring program created by women engineering students at Georgia Institute of Technology to train and empower the next generation of girls in science, technology, engineering and mathematics is bearing fruit, underscoring the importance of fostering community and having role models in order to support women pursuing STEM degrees and careers. 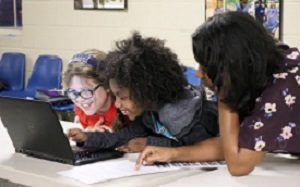 In creating Stempower during their first year in Georgia Tech’s Grand Challenges Living Learning Community four years ago, founders Kaitlin Rizk, Brenna Fromayan, Natalie Leonard and Wendy Ng sought to build an organization that would demystify STEM and increase confidence and interest in STEM among girls ages 8 to 12 earlier in their educational development.

Stempower now has chapters at Stanford University, Purdue University, the University of Tennessee and other campuses across the United States and in Uganda and Kenya. More than 200 girls have participated in the program since 2016, and surveys administered by the founders indicate that 80 percent of the girls are now more interested in STEM and 63 percent have increased self-efficacy.

Mentoring and hands-on workshop sessions hosted bi-weekly work to overcome three primary factors the founders said push women out of STEM: a lack of self-confidence, a lack of community and a lack of role models.

“We decided to create a mentorship program that paired college-aged women with pre-teen girls because we noticed that their confidence tends to drop right before middle school,” said Fromayan, an industrial and systems engineering student and vice president and co-founder of Stempower. “We wanted to intervene before that time to try to boost their confidence and provide relatable role models for them in STEM.”

Such efforts play a role in retaining women in STEM, said Dr. JoAnn Browning, dean of the College of Engineering at the University of Texas at San Antonio (UTSA), who reinforced the idea of exposing young girls to “strong female role models” and encouraging them to keep all of their career options open. Stempower’s mentoring program runs for four-month intervals in the spring and fall and pairs groups of girls from Girl Scouts of America and other local schools and organizations with women mentors from a nearby college or university. Each Stempower mentoring session has a different theme and includes STEM activities and lessons on classroom confidence, such as the importance of raising their hand to ask questions, goal-setting and supporting other women.

Stempower mentors also emphasize the “growth mindset” to their mentees to show that they can solve a problem even if they have never experienced it before.

“Girls tend to lack the growth mindset and have more of a fixed mindset and believe, ‘Oh, you’re either born with STEM abilities,’ or ‘You’re either good at math or you’re not,’” Fromayan said. “We want to teach them that knowledge can change and knowledge can grow, and that if you work hard, you can accomplish whatever you set your mind to.”

Rizk, an industrial and systems engineering student and CEO and co-founder of Stempower, added that “the biggest issue that we see is, in fourth grade, the girls already tell me that they hate math.”

“There’s no logical reason behind it,” she said. “It’s just cultural influences, and in the media, they see girls throwing themselves down in films. That’s something that we are actively fighting against.”

Beyond the soft skills, mentors work with the girls to familiarize them with coding techniques and other hands-on activities that encourage them to make mistakes and not be afraid to get their hands dirty while building, breaking apart and rebuilding a project.

Mentors come to the mentoring sessions with “STEM Kits” because the founders noted a dearth of STEM toys for girls in the market. The “Squishy Circuit,” for example, teaches girls how to make a circuit with dough that is either conductive or insulating with LED lights.

“They have to figure out what a conductor is and how everything works together,” Rizk said.

At the conclusion of the mentoring program, Stempower participants tour the local university where their program is held, and the girls explore laboratories, watch STEM demonstrations and receive a Stempower STEM certificate.

Recruiting other women in STEM to serve as mentors for Stempower has been “fairly easy,” Fromayan said.

“I think all women in STEM are aware of the gender gap,” she added. “Because we have so many women working with us, we’ve also created our own community of women at Georgia Tech and at these colleges who are all passionate about solving the same issue. So we’ve been able to develop a type of community amongst the mentors themselves.”

Stempower is also an outreach initiative of the Center for the Study of Women, Science, and Technology (WST) at Georgia Tech. The organization is actively recruiting for its summer camp.

Approaching graduation, the founders said they are working to ensure that Stempower is sustainable in its efforts to instill confidence in younger girls interested in STEM. Fromayan said she would love to see the girls enroll and succeed in more advanced math and science classes when they get to high school and college. Rizk added that she wants to see the girls remain confident and ultimately create their own companies as she and her co-founders did with Stempower through the entrepreneurial Create-X program at Georgia Tech.

“They have been so supportive in helping us think in an entrepreneurial mindset,” Rizk said. “We really hope more women enter in their program.”

Having STEM industries or programs that are led or influenced by women could potentially create the spaces that promote persistence and inclusion in the field.

“Women persistence in STEM fields is also problematic, and so creating women and family-friendly policies in our industries and institutions is critical to convincing women that their careers in STEM fields do not have to compromise all of their goals in life,” Browning said.

Notably, Browning added that, in addition to having women role models, representation in the classroom is essential for supporting women in STEM. She cited the hiring of female faculty, female graduate students and teaching assistants as having a “tremendous impact on the educational development of our female students,” at UTSA, Browning said.

Leaders in UTSA’s College of Engineering ensure that women engineering students have a supportive network during their matriculation. The college created peer groups for women through student organizations and activities in the Student Success Center. There are also networking opportunities for women students to connect with women leaders in their fields.

As a result, the college has increased women students from 16 to 20 percent within the last three years. The creation of a new degree program in chemical engineering will expand opportunities for women interested in the subfield and will help the college build a critical mass of female engineering students, Browning added.

Browning said that there is a need for more women in STEM, pointing to the integration of technology in the workforce and broader society.

“We must encourage our girls to consider STEM careers because of the importance of the STEM solutions to the advancement and sustainability of our societies,” she said.