The NCAA Board of Governors is reported to be assessing their rules after unanimously voting Wednesday to accept the recommendations of a special panel that proposed drastic changes to college basketball. 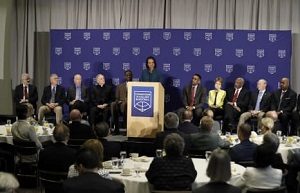 Condoleezza Rice flanked by members of the Commission on College Basketball.

The decision came after the board met with the 11-member panel of the Commission on College Basketball and its leader, former U.S. Secretary of State Condoleezza Rice, who released a scathing report on the issues that plague the game.

“The levels of corruption and deception are now at a point that they threaten the very survival of the college game as we know it. It has taken some time to get here, and it will take some time to change course,” the report said.

The commission called for the end of the college players’ “one-and-done” rule, which would require the approval of the NBA and its players union. It involves the best talents in college basketball playing only their freshman season before being eligible for the NBA.

If the NBA and union do not change the rule, the commission said it would reconvene to consider unilateral alternatives such as freshman ineligibility.

In a joint statement issued just hours after Rice announced the recommendations, the NBA and the players’ union pledged only to continue assessing the rules.

Dr. Tomika Ferguson, an assistant professor in the Department of Educational Leadership at Virginia Commonwealth University, said she was elated to see the commission’s report focus on the student athletes and on ethics.

“Something has to change,” Ferguson said. “I hope the NCAA’s actions are swift, strong and long-lasting. No one wants to think the NCAA is corrupt. They are there to protect the students and the institution. There just needs to be more stringent rules so that athletes are not taken advantage of. I think it is very interesting now that the public, including students’ parents, are given the opportunity to hear the full story.” NCAA president Mark Emmert commissioned the panel last October after an FBI investigation. Federal prosecutors in New York filed three complaints detailing various schemes, including one in which top high school prospects’ families were bribed and another where assistant coaches accepted money to steer their players toward a specific agent or money manager. At the time, Emmert publicly said the allegations “strike at the fundamental integrity of college sports.”

The commission also included former NBA players Grant Hill and David Robinson, former coaches, university presidents, the heads of the Association of Universities and USA Basketball and others. They did not take on the so-called “collegiate model,” but did seem to endorse the “students first” model in which students are barred from any compensation, even as college basketball has evolved into a multibillion-dollar industry.

“Our focus has been to strengthen the collegiate model – not to move toward one that brings aspects of professionalism into the game,” Rice said.

The commission acknowledged that the corruption it sought to eliminate arose in part due to the substantial money players generate for high school teams, agents, managers, college teams, coaches and shoe companies and how it conflicts with NCAA rules that prohibit players from taking money beyond scholarships and related costs of attending school.

“Million of dollars are now generated by television contracts, and apparel sponsorship for the NCAA, universities and coaches,” according to the report. “The financial stake in success has grown exponentially; and thus, there is an arms race to recruit the best talent – and if you are a coach – you keep your job.”

Rice expressed approval for providing athletes with a cut of the commercial use of their names, images and likenesses, which is currently before the courts.

“When it comes to playing professionally, I think what many of those participating in college basketball have to do is be open to playing outside of the NBA and its G-League,” said Bennett, who also is co-editor of Black Males and Intercollegiate Athletics.

“For so many guys, it’s NBA or bust. There are leagues in France, Italy, China and Greece, and they can make a good living playing there. Being able to return is also a great move.

“So many student-athletes are misled, misinformed, and often have a false sense of reality that leads them to make very bad business decisions on their behalf. Being able to return without signing a contract is a step in the right direction.”

“Their push for everyone to take responsibility for the past and set a course for a new future is a great idea,” he said. “However, they claim ‘this is a final opportunity to turn the course of college basketball in the right direction’, to which I disagree. The prospect of correcting wrongs should be the course of action of future generations. Yet, the sense of urgency they are creating makes sense, as changes need to happen now.”

Both Ferguson and Bennett wonder if the proposed changes will affect other NCAA sports, including football and women’s basketball.

“The push for reform with college football is long overdue,” said Bennett.