HONG KONG — He is sometimes called the Mark Zuckerberg or Bill Gates of China. 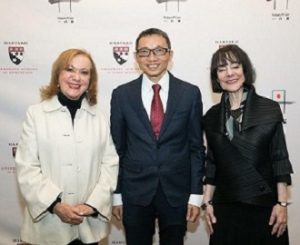 And like Zuckerberg and Gates, Chen Yidan — also known as Charles Chen — has used his financial empire to make education a top priority.

Education has become a personal mission of the 46-year-old billionaire who has founded the world’s biggest education prize — the Yidan Prize — to call attention to scholarship aimed at advancing educational research and practice at a global level.

“Education has the power to transform lives and make the world a better place, and this is achievable through uncovering, nurturing and expanding human potential to meet the needs and challenges of an ever-changing world,” says Yidan. “We must do everything we can to broaden the horizons of our children, so that they can thrive in a world that lives only in our imagination now.”

The soft-spoken philanthropist, who made his billions as the co-founder of Tencent — a Chinese multinational conglomerate that specializes in various internet-related services in China and abroad — has invested his own money to support scholars who are making contributions in the field of education.

“First and foremost, the Yidan Prize pushes for progress in the field of education,” says Yidan. “I envision the prize as a platform that brings together the best ideas about education from around the world, to exchange pedagogical theories and practices that are effective and benevolent.”

In December, Yidan announced the inaugural winners of the Yidan Prize: Dr. Carol S. Dweck, the Lewis and Virginia Eaton Professor of Psychology at Stanford University, and Dr. Vicky Colbert, founder and director of Fundacion Escuela Nueva, a non-governmental organization that works to establish affordable schools in the South American country of Colombia.

They each received a gold medal and $3.87 million from Yidan’s foundation to continue their work.

“It is a great honor to receive the Yidan Prize for Educational Research and I accept it on behalf of my extraordinary students and colleagues,” says Dweck, whose research on ‘growth mindset’ had already established her as one of the nation’s leading scholars. “It is critical for educators to know that we cannot nourish the mind without the heart.

“We cannot expect good learning — joyful and effective learning — to happen in a mind that is disconnected from the heart. And we cannot expect our students to create the world of tomorrow, the world that we hope for, without a heart-mind that connects them to each other, to the larger society, and to the planet as a whole.”

Yidan has made diversity and closing the achievement gap his top priorities.

“Education may be the slowest solution to many social problems, but it is the one solution that will eventually move society forward and give people hope,” he says.

More than just an idea

Yidan’s commitment to education is so strong that he has created a private institution in China named Wuhan College that he says will become a training ground for China’s tech industry, similar to Stanford’s close relationship with Silicon Valley.

The focus of the college, according to Yidan, is on “whole person development,” and the institution encourages partnership and collaboration over competitiveness.

Born in the Chinese town of Huizhou, Yidan says his grandmother was his first inspiration.

“Every morning, she would be busy around the house, cooking eggs and urging me to go to school,” says Yidan. “She never said anything, but I could tell what her expectations were by the expression in her eyes.”

His grandmother, who was illiterate, was adamant that her son — Yidan’s father — go on to college.

“Education changed his life, which in turn changed my life,” says Yidan, speaking through a Chinese translator, although he speaks English. “Education is not just about schooling. It is about value. In my entire career, I can prove that education has made me what I am today.”

After earning a bachelor’s degree in chemistry from Shenzhen University and a master’s degree in law from Nanjing University, he co-founded Tencent in 1998, serving as chief administrative officer, responsible for the day-to-day operations of the successful company.

By 2013, his focus had shifted to philanthropy, and he retired from the company and started his own charity foundation.

In this regard, Yidan has been on a mission to find answers that produce best outcomes in education.

“We find that no matter whether people come from a rich or developing country, in the East or the West, they are talking about similar concerns,” says Yidan, who convened an international summit on education in December 2017, bringing together more than 350 global leaders from 35 economies, including business leaders, policymakers and senior representatives from multinationals, NGOs and academia to discuss how to develop best practices in education.

Yidan has been crisscrossing the globe to bring more attention to education by way of his prize.

“We think that the prize is so important for social development and education promotion,” he says. “It is actually to promote best practices for education. We are trying to find examples to become a role model.”

The financial prize, he says, is just a tool.

Colbert says that she was surprised and honored when she was notified that she had been nominated for the prize for education development.

“The recognition that we received through this prestigious award is a further motivation to continue our commitment to the cause of basic education of high quality for our children,” says Colbert. “We will continue to work to establish affordable schools of excellent quality, where children, teachers and parents are empowered to learn and contribute to a culture of peace and citizenship in their environment.”

Carrie Lam, the chief executive of Hong Kong, believes Yidan’s work and his prize will have a lasting impact.

Speaking at the summit back in December, she hailed Yidan as a visionary and a thought leader.

“The Yidan Prize gives us much to look forward to in education excellence,” says Lam, who recognized Dweck and Colbert as the inaugural laureates. “And for this, I am grateful to Dr. Chen, the Yidan Prize Foundation and the international judging committee for their commitment to global education and educators, and for their contributions to the sustainable development of the world we live in. Working together, I know we can create a better world through education.”

Issues in Higher Education: Remediation and the Achievement Gap

Here’s A Way To Google Black History Like Never Before