The James B. Duke Professor Emerita of English at Duke University, who retired last year, doesn’t like how a senior administrator used his power and influence to cause two campus coffee shop contract workers to lose their jobs this week because he was offended by some of the lyrics in a song they were playing. 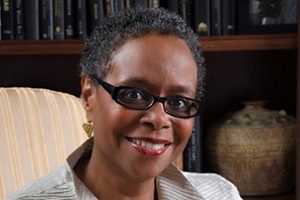 The unfolding story at Duke is among a recent spate of highly publicized incidents on college campuses that many perceive as racial intolerance and bias.

When a Black Yale student studying in a dormitory commons area nodded off, a White resident who saw her asleep called campus police and complained, resulting in an unpleasant encounter early Tuesday morning. Police interrogated the 34-year-old Black student, who posted videos of portions of the encounter on social media.

On Saturday, social media was ablaze with video that quickly went viral showing a White graduation official manhandling Black students who were celebrating as they crossed the stage at a University of Florida commencement exercise. He reportedly rushed or restrained upwards of 30 demonstrative graduates, mostly Black.

Two Native American brothers on a Colorado State University college campus tour  last week were detained and missed the rest of the event after a parent called the police and said she was nervous about the teens’ presence.

Public criticism was swift in each case – thanks to social media – and schools are responding.

At Yale, dorm officers admonished the student who called police.

University of Florida President Dr. Kent Fuchs addressed his school’s controversy at a subsequent graduation ceremony, issued apologies on social media and said he was personally reaching out to 22 students via letter, email and telephone. Meanwhile, the school placed the aggressive faculty member on paid administrative leave this week while the matter is addressed.

And at Duke, the Joe Van Gogh coffee shop owner Robbie Roberts issued an apology Wednesday on Twitter, saying he is working on remedying the situation. Although the song the Black female and White male worker were playing contained the f- word and the N- word, many felt that termination may have been too swift and too harsh.

The apology was in a statement Duke issued Wednesday, with the university saying it regrets “the pain this incident caused to those who look to Duke to uphold the highest values of fairness and equity to all members of our community.”

In an email Thursday afternoon to all faculty, staff and students, President Vincent E. Price apologized for “the precipitous and unfair treatment these employees experienced” and pledged to involve the university community in efforts to move forward and do better.

“”We have somehow lost the sense of compassion and human tolerance that should define our community,” he wrote. “This is reflected in the ways we interact with each other, the ways we hold ourselves and others accountable for our conduct, and in our words and deeds as scholars, students and employees.

“At the same time, we cannot and will not succumb to a rush to judgment that demands instant retribution absent context and deliberation.” 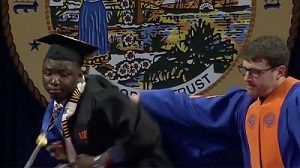 Controversy at a 2018 University of Florida commencement ceremony

Some say the current racial and political climate contributes to the problem. They have “heightened the othering of people of color,” says Dr. Marybeth Gasman, director of the Penn Center for Minority Serving Institutions and Judy and Howard Berkowitz Professor of Education at the University of Pennsylvania. “I think there are Whites who consider spaces theirs and are emboldened to call the police or report people who they don’t think belong in these spaces. This is how White supremacy works. It assumes that Whites belong and are innocent and people of color do not belong and are guilty.”

Holloway agrees, citing the incident at Yale as an example.

“White people are used to being in those spaces without question. And when they see Blacks exercising the privilege that is part of their everyday life, they are disoriented. Black equity and black excellence are disorienting. Black people occupying spaces that Whites are used to having as their own is disorienting.”

Cheryl Crazy Bull, president and CEO of the American Indian College Fund, sees “an assertion of social and economic power resting in White privilege that appears to be foundational in these situations.”

“Higher education institutions are definitely not immune from the acting out of the least attractive of society’s priorities and values,” she says. “Racism and bias are rampant in our educational institutions. Isolated incidents are in fact not isolated, but appear so because much of what occurs is not reported.”

The recent occurrences, despite heightened publicity, definitely are not uncommon, says Dr. Shaun Harper, a Provost Professor in the Rossier School of Education and Marshall School of Business and the Clifford and Betty Allen Chair in Urban Leadership at University of Southern California.

“These things happen every week across the country,” says Harper, who as executive director of USC’s Race and Equity Center works with a team that researches racial climate on college campuses. “These are horrific expressions of anti-Blackness and racial violence against Native Americans.”

Stories of racial intolerance, insensitivity and bias are consistent in data the center has gathered from interaction with more than 10,000  non-White and White college students over the last 11 years, Harper says.

Could the incidents be about anything other than or in addition to race?

Harper, like Holloway, answers with an immediate and emphatic “no.”

“They don’t send the police on White folk when they are asleep in a commons place in a residence hall,” says Harper. “Nor do White parents call the police on White students who they think are behaving suspiciously on campus. These things don’t happen to White people, by and large, nor with the frequency or intensity that they happen with students of color.”

Cheryl Crazy Bull says it is about race, but it also is about people’s fears of guns and violence.

“Underlying the decisions by people who are reporting on people of color for not belonging is fear that these people who don’t belong will commit acts of violence,” she says. “Yes, the climate in the United States is one of fear of the other. It is fostered in the media, public policy and in human interactions. So, underlying the decision to report a person of color are also the fears that accompany differences in dress, music, social behaviors.  When a total stranger – the parent who called 911 at Colorado State University – attempted to question two young American Indian men who didn’t respond by chatting or answering her questions, that failure to interact in the manner she deemed appropriate stacked itself on top of her fears about their color, their mannerisms and their clothing.”

Observers say schools must move from reactive to proactive to prevent incidents such as those that have become national conversations in the last two weeks. President and CEO Derrick Johnson, responding to the situation at the University of Florida on behalf of the NAACP Florida State Conference, has called for “greater implicit bias training and training for elected officials, corporate employees, and those who deal with the public.”

Harper stresses proactivity, contending that too many colleges and universities adopt the attitude that negative racial incidents cannot happen on their campus – and when they do occur, the school is unprepared to properly address them.

“College and university leaders need to get much more serious about preemptively dealing with racism and race relations on their campuses, and not waiting for an eruption or tragedy or headline-grabbing situation to start addressing issues,” he says. “They need much more of an institutional strategy for dealing with what’s real. And they need to take more seriously what students tell them about racialized incidents on their campus instead of brushing it off as an isolated incident or grumpy students.”

Cheryl Crazy Bull recommends five ways for institutions of higher learning to be safer, more inclusive and more welcoming places for indigenous students: acknowledge whose land the institution operates on, because all land at one time belonged to indigenous communities; educate faculty, staff and students about racism and how to overcome it; ensure that indigenous knowledge and information is appropriately included in curriculum, pedagogy and programming and invest in student support; learn about and share student data, investing in student access; and report on partnerships and tribal relationships.

Schools also should stop allowing racial intolerance and bias by hiding behind protocol and ideas of free speech, Holloway says.  She urges correctives such as college scholarships to the two Native American teens, for example, and assault charges against the grabby faculty member at the University of Florida.

“It’s time to stop forming new committees to plan ‘kumbaya’ moments. It’s time for reparative and restorative justice, not just more committee work. Diversity committees? Been there, done that. It’s time for a policy that protects from White aggression.”

Holloway wants a better college climate at Duke and elsewhere for all stakeholders of color – including her daughter, Ayana Arce, a tenured professor in Duke’s physics department and the first Black woman to graduate from Harvard with a Ph.D. in physics.

“So I have a deep interest in this campus doing right and being right,” she says. “I’m about to be a dangerous retired person.”