James Shaw Jr., the 29-year-old man who was hailed a hero for toppling a gunman who opened fire at a Waffle House in Antioch, Tenn., was recognized by his alma mater, Tennessee State University. 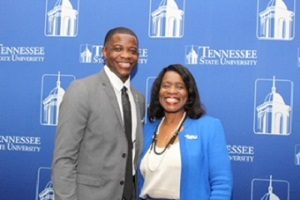 Shaw appeared on campus this week to meet with the seven families who were impacted by the shooting and to hand over nearly a quarter-million dollars he raised for them.

“I truly wish I was welcoming you to our university under different circumstances, but please know that you have all been in our thoughts and prayers since the horrific events of April 22 unfolded,” said TSU President Dr. Glenda Glover.

In a private ceremony, Shaw met individually with the families, who thanked him for his heroism during the shootings. He then gave over $240,000 to the injured victims and the families of Akilah DaSilva, DeEbony Groves, Taurean Sanderlin and Joey Perez, who died in the shooting.

A replica of the check was presented to the families during a luncheon and the amount will be evenly divided among the families.

Shaw has become a national hero after he wrestled a rifle away from Travis Reinking and tossed it over the counter before shoving the shooter out the door. Reinking has been charged with four counts of criminal homicide, four counts of attempted homicide and one count of possessing a firearm while committing a felony in connection to the shooting.

“Had you not been there, everybody in that building would have been killed,” Renee Hampton, the aunt of Sharita Henderson, who was wounded in the attack, told Shaw. “I just want to say thank you.”

Shaw said he plans to create a platform to address the issue of gun violence and mental illness.

Four balloons later were released on the university’s campus in remembrance of those killed.

Earlier this month, TSU set up a scholarship in Shaw’s name. More than $15,000 has been committed, and school officials said additional financial support has been pledged.

“The TSU family is extremely proud of alumnus James Shaw, Jr., for his bravery and courage,” said Glover. “James epitomizes the core values and mission of our institution, which is think, work and serve. His genuine concern for the well-being of others is a tribute to his parents, who are also TSU alumni.”

Shaw said he was moved by the public recognition.

“Like I said, I was just trying to save myself. I did this with no recognition,” he said. “But it seems like it inspired so many people throughout the world. For that, I am greatly, greatly appreciative.”