Finances, safety and institutional capacity are the main challenges ahead for two of the nation’s biggest university systems, according to their leaders, who discussed the topics recently at the Education Writers Association National Seminar in Los Angeles. 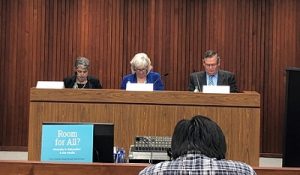 Napolitano cited financial resources, free speech on campus and the handling of sexual violence and harassment as priorities the UC system is working on. She said she is working to increase philanthropy in the UC financial model while ensuring that the system “continues to be an engine of social mobility” for California residents.

Currently, UC covers tuition and fees for any California student whose family makes less than $80,000 annually.

“We are continuing to meet our obligations under the master plan, but the financial stresses on the system are real,” Napolitano said.

The Master Plan for Higher Education in California – passed as the Donahoe Higher Education Act in 1960 – assures that higher education institutions in the state provide “appropriate educational opportunities” at reasonable costs to all qualified California students. Another goal of the plan is to “guarantee essential expansion without wasteful duplication” of educational resources.

Under this plan, UC is designated as the state’s primary academic research institution. And more broadly, the UC leader sees California’s entire education system as a “propellant” of the state’s economy.

“There are whole swaths of the California community” that would not exist without research universities, Napolitano said, referencing California’s newly minted status as the fifth-largest economy in the world.

In addition to the items Napolitano mentioned, CSU Chancellor White said the issue of capacity will be a challenge going forward as more low-income and minority students enter the state’s public higher education institutions.

CSU system leaders are working to improve policies so their students – many of whom are transfer students from community colleges – will not have to take remedial courses, which sometimes hinder their progress to degree completion, White said. “We had to remediate remediation.”

By focusing on student completion and students’ “soft spots” in reading or math proficiencies, the CSU system has achieved a time-to-completion rate of 4.7 years.

The system also worked to eliminate administrative barriers to degree completion such as a $50 library fine on a student’s account.

Ten of White’s 17 presidential appointments are or will be women, expanding the diversity of leadership throughout the CSU system. This means that women will lead 12 out of 23 CSU campuses.

On a similar diversity note, the UC system recruited faculty to participate in celebrations for first-generation students, highlighting the importance of role models for that demographic, Napolitano noted.

Additionally, UC provided more support to first-generation students so that their graduation rates mirrored the rates of their later-generation student peers. “So just baking that into our DNA was very important,” Napolitano said.

Perceptions of mistrust in higher education, in addition to Californians’ views that the state has underfunded higher education “for too long,” make this year particularly important, White said. There must be a combination of need, capacity and will to fully support students in the public higher education system, he said.

“When we talk about capacity,” Napolitano added, “it’s capacity and quality.”

California now has the capacity to invest back into things such as higher education in ways that previously were not available due to the recession, White said. The state’s education systems must now align themselves to ensure there is “sufficient capacity” to get all students to succeed, he said.

There is also a “tremendous” need for more bachelor’s, master’s and doctoral degrees to fuel the economy, which means that “we need to up our game” to get 500,000 more students to earn a degree by 2030, White added.

The two leaders also spoke to some of the misperceptions plaguing higher education: that higher education indoctrinates students with “liberal philosophies” or that many undergraduate institutions have students leaving with “outrageous” levels of debt.

“College faculties generally seem to [skew] perhaps more to the liberal side, but that doesn’t mean that it translates to what’s going on in the classroom,” Napolitano said, adding, that there is no liberal view of college calculus, for example. “Our students are very capable” of forming their own opinions, she said.

White cautioned against “generalities in the absence of facts” in conversations and news reports that paint all colleges and universities as “too expensive” or as places where the faculty sometimes do not care about student success.

Napolitano worries that the current narrative of affordability is deterring students from attending college and causing missed opportunities that could be beneficial to them. Higher education needs more public support, she said.

“Getting the reporting on the financing and the cost right is something that I would encourage us all to do,” said Napolitano. “We need, as higher education leaders, to really be out there advocating for what it is that we do and how we do it.”