History teachers and mentees at higher education institutions across the nation expressed regrets and sorrow this week over the passing of one of their most noted peers—Dr. Ira Berlin, the renowned history professor who dramatically enhanced American appreciation and understanding of the role of slavery in America.

Berlin was a New York City native who earned a bachelor’s degree in chemistry from the University of Wisconsin then switched gears in the civil rights era of the 1960’s and got subsequent terminal degrees in history at Wisconsin. He died June 4 at a Washington, D.C. area hospital at age 77. The cause of death was complications from multiple myeloma, according to statement from his family. 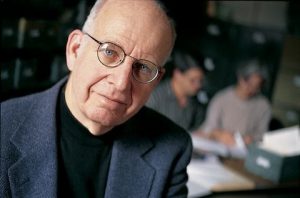 “He [Berlin] was an exceptional scholar who changed how we look at slavery and freedom,” said noted historian Dr. Edna Greene Medford, interim dean of the college of arts and sciences at Howard University. Berlin was Medford’s dissertation advisor at the University of Maryland when she was studying for her doctorate in history which she earned in 1987. “Before his ideas about slavery, our views were one dimensional,” said Medford

Medford, a historian focusing on the post-Civil War history period for 31 years, said that she learned much from her doctoral adviser that sticks with her today.

“He was willing to let students reach their own conclusions,” Medford said. “ He put forth his arguments. If you disagreed, he was a tough task master. . .” Berlin demanded “meticulous research to back it up,” Medford said, adding that he was was accommodating but not a pushover.

Berlin joined the faculty at the University of Maryland in 1976. His research and writings broadened the knowledge of slavery, said experts who were familiar with his scholarship.

On a personal side, Berlin “had a huge impact on my career,” said Harris, a New Orleans native who earned her bachelor’s degree from Columbia University in 1988 and her doctorate in history in 1994 from Stanford University. Berlin was her “mentor” when she went to Maryland to study for her post-doctorate degree, she added. In the years since, they have worked on several history pursuits including co-editing Slavery in New York.

Berlin was credited with being the moving force behind The University of Maryland’s decision in 2015 to devote part of its updated library plaza to the late Frederick Douglass.

Dr. Evelyn Brooks Higginbotham, the president of the Association for the Study of African American Life and History (ASALH) and a prominent Harvard historian, called Berlin a “giant” in the field.

“All scholars of the wartime experiences of African Americans recognize his tremendous contribution to the study of Black life, labor, and military service during the Civil War years,” said Higginbotham. “ASALH extends its deepest sympathy to the family of our dear friend, mentor, and teacher.”

University of Maryland Student Newspaper Shuts Down Its Print Edition