The topic of immigration has been weighing heavy on hearts as the nation watches President Donald J. Trump’s policy separate families at the U.S. border.

As images emerge of children being separated from their families, scholars and human rights advocates who study these issues refer to the president’s “zero tolerance” immigration policy as heartbreaking, immoral and, at the extreme, a “systematic use of violence.” “It’s disgusting. It’s completely immoral and quite embarrassing because everyone is watching how we’re treating the most vulnerable people who come and seek asylum in our country,” said Dr. Susana Muñoz, assistant professor in Colorado State University’s School of Education. “Regardless of what policies say, there is a moral obligation to protect children at all times.”

Health practitioners, civil rights organizations and human rights groups around the country have called on the administration to end its latest immigration policy of separating children from families, and instead, find alternative measures to immigration proceedings.

Zeid Ra’ad al-Hussein, the United Nations High Commissioner for Human Rights, spoke out against the policy during an address in Geneva on Monday. His comments preceded the United States’ decision on Tuesday to withdraw from the UN Human Rights Council for “political bias” over other foreign relations issues.

“The thought that any state would seek to deter parents by inflicting such abuse on children is unconscionable,” al-Hussein said.

He continued: “People do not lose their human rights by virtue of crossing a border without a visa. I deplore the adoption by many countries of policies intended to make themselves as inhospitable as possible by increasing the suffering of many already vulnerable people.”

A letter sent to Trump from the American Psychological Association implored the president to reconsider the policy and “commit to the more humane practice of housing families together pending immigration proceedings to protect [children] from further trauma.”

“Children deserve complete protection and full humanitarian assistance, under all circumstances,” added Donna McKay, executive director of Physicians for Human Rights. “It is our moral obligation.” Experts and doctors cite anxiety, depression, post-traumatic stress disorder and other social, physical and mental implications as a result of separation of children and parents.

“I honestly don’t think you need to be a doctor to understand that,” said Deborah A. Popowski, executive director of the Center for Human Rights and Global Justice and a Research Scholar at NYU School of Law. “You just have to be human to know that what they’re doing to kids so young is violent.”

Popowski likened the policy to “state terror” and said that when “you strip away the euphemisms” in language used by the administration – such as “deterrent” or “zero tolerance” – all that is left is “the systematic use of violence to instill fear in a population in order to achieve a political objective,” she said.

Trump has acknowledged that the policy is partly a negotiation tactic, and he has put the onus on Democrats to solve the country’s immigration crisis.

Still, Muñoz argued that the “zero tolerance” immigration policy is rooted in White supremacy. She adds that, historically, the country’s immigration policies have been racialized, and that current policies would not be in place if the children “were blonde and blue-eyed and White-skinned.”

“When you have an administration that has continually provided this rhetoric around anti-immigrant, anti-Mexican, anti-Black, anti-Brown, there’s almost this emboldened racism that has taken action,” she said, noting that there is an element of fear being exploited to frame and “control the narrative” of the immigrant population or those considered “others.”

Since the “zero tolerance” immigration policy began, nearly 2,000 children have been separated from their family members. Border control has restricted reporters and news outlets from gathering much from processing centers, but images that have been captured show children sleeping on mats or wrapped in space blankets while caged inside of metal enclosures.

Some observers point out that the Trump administration is following the letter of the law enacted by Congress, with the family separations  supported by President George W. Bush and even more so by President Barack Obama.

They contend that while temporarily separating children from adults who have illegally entered the U.S. is an unfortunate consequence, the children are treated humanely and the process is necessary because authorities must verify that the children actually do belong to the adults. Human trafficking is a problem at the southern border as well as drug smuggling, many point out. 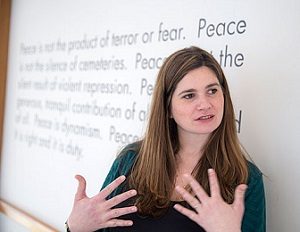 Some also contend that, given a spike in the number of individuals attempting to illegally enter the U.S. in recent months, including unaccompanied minors, strict enforcement can be a deterrent while lax enforcement acts as an incentive.

On June 18, Secretary of Homeland Security Kirstjen Nielsen spoke to press members about the Trump Administration’s “zero tolerance” policy in efforts to answer the many concerns about recent actions taken at the border.

“Apprehension without detention and removal is not border security,” Nielsen said. “We have repeatedly called on Congress to close these loopholes.”

During the discussion Nielsen brought up issues of documentation involving family relationships, past criminal charges parents or guardians may possess and concerns about human trafficking as justifications for family separations.

“If there’s no documentation to confirm the claimed relationship between an adult and a child, we do so if the parent is a national security, public or safety risk, including when there are criminal charges at issue and it may not be appropriate to maintain the family in detention together,” Nielsen said. “We also separate a parent and child if the adult is suspected of human trafficking. … In the last five months, we have a 314 percent increase in adults and children arriving at the border, fraudulently claiming to be a family unit.”

Popowski said she is heartened to see an outcry over the administration’s policy.

On Tuesday, a group of 100 women of faith held a rally and prayer vigil in front of the U.S. Customs and Border Protection headquarters. More than 5,000 additional women signed an open letter calling for a complete stop of “ripping children out of their parents’ arms and holding them in detention centers.”

Representatives from a broad spectrum of civil rights groups, including National Action Network, UnidosUS, the League of United Latin American Citizens, the National Urban League and the Anti-Defamation League, among others, called for an end to the “devastating” child separation policy.

“This policy is an abomination, but it is not an aberration,” said Janet Murguía, president and CEO of UnidosUS. “Today we are demanding that the administration end this policy now. We are urging Congress to reject Trump’s demands. We are asking Republicans to state where they stand — for cruelty and inhumanity or for children and families. This is not who we are or should be as a country.”