A Seat at the Table for KIPP Alumni - Higher Education

A Seat at the Table for KIPP Alumni

WASHINGTON – The Knowledge Is Power Program (KIPP) centered students who are alumni of the charter school network at the forefront of a conversation this week about what it takes to get to and through college during a panel on Capitol Hill.

Moderated by Dr. Michael Lomax, president and CEO of the United Negro College Fund, the panel featured the 2018 KIPPster Federal Policy Fellows who discussed the value of high expectations for student success, simplifying financial aid and the importance of community on campus for underrepresented groups. 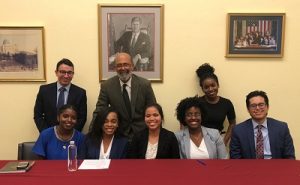 As KIPP Federal Policy Fellows, the students and recent graduates will participate in a paid Congressional internship, giving them access to civic groups, professional development and a “seat at the table” in education policy discussions.

The panelists began by discussing the ways their KIPP experience prepared them to make informed decisions about their college choices. Panelists noted that their KIPP schools set higher expectations for them and provided more resources than some of the schools they previously attended.

At KIPP, “they told me that I could do better and I could excel,” said De’Ja Wood, a rising sophomore at Duke University. Wood added that her school, KIPP St. Louis, provided her with the supportive resources and mentors needed to succeed academically.

Similarly, Mariama Barry, a rising junior at Franklin and Marshall College, said the presence of more academic counselors per student – thus, a more personalized advising experience – at KIPP Massachusetts played a role in her decision to attend the private, liberal arts college in Pennsylvania.

A school counselor matched Barry’s interdisciplinary interests in international studies to several schools, she said. After picking Franklin and Marshall, she decided to focus on human rights within her major.

The biggest factors for the panelists’ college decisions were affordability and access to opportunities that could help each individual reach personal and career goals. Moreover, the students and recent graduates agreed on the need to simplify the Free Application for Federal Student Aid (FAFSA) process, particularly for first-generation, low-income and undocumented students.

Brandon Gonzalez, a rising senior at Colorado State University, shared that some immigrant parents do not have Social Security numbers, making it difficult for their children to fill out the FAFSA application each year for aid.

Gonzalez did not know who to trust or who was giving accurate advice, he said, but now at CSU, counselors ensure that students fill out their FAFSA forms correctly.

Mekka Abdullah, a rising junior at Fisk University, added that KIPP Nashville provided FAFSA workshops. Such workshops proved helpful as she found the FAFSA application to be longer than it needed to be and the application’s jargon and acronyms confusing, she said.

Erika Mey, a first-generation student and recent University of California at Irvine graduate, said she was on the “verge of quitting” while applying for scholarships until her KIPP Los Angeles counselor encouraged her to apply for the CEDAR SoCal Scholarship, a “last-dollar” scholarship that covered all of her expenses for UC Irvine.

“That took away the financial burden,” Mey said.

Housing costs in California have long been an issue for students. “They just don’t have a place to stay,” said Omar Sanchez, a junior at San Diego State University, referencing a study that found that 1 in 10 California State University students is homeless.

Sanchez, Gonzalez and Gettysburg College graduate Chentese Stewart also shared experiences from their campuses about students having to find alternative food or housing plans because, in some cases, they could not afford to go home over break.

Gonzalez hopes to provide resources for students who are housing and food insecure.

Feeling welcomed or having an inclusive space on campus was another issue the students and recent graduates noted as essential to their collegiate experience. For one student, a lack of representation resulted in his decision to switch majors from business administration to economics.

“You don’t really see people that look like you,” Sanchez said about his previous major. “You have to go out of your way to find Brown people.”

Sanchez established his community by joining student organizations and by finding professors who supported him. He intends to pursue a Ph.D. in economics and conduct research.

Transferring to an institution that supported Dreamer students academically and socially allowed Gonzalez to feel safe on campus and be the full-time student that he wanted to be at CSU, he said. Previously, at the University of Puget Sound, he added, he “felt more like an athlete and not a student.”

Giving insight into the value of minority-serving institutions, Abdullah mentioned that her HBCU felt like a “family community,” and that she was able to connect with a diverse population of students from across the African diaspora.

Several panelists added that having multicultural centers on campus or joining a Black student union or Alliance, for example, helped them engage as a community around issues affecting minority students. Wood found a “safe haven” in the BSA at Duke while meeting with administrators and protesting instances of racial bias or harassment on campus, she said.

In closing, Lomax charged the students to carve their own space moving forward.

“You’re always going to have to be forcing your way into the conversation, making sure your space is there whether you’re comfortable or not,” he said. “Just remember that you belong wherever you are.”