A Harlem Daughter Gives Back

Dr. Terri N. Watson is proud of her Harlem background, and although much of her earlier research was conducted in Florida where she earned her Ph.D., she has returned to her roots and is breaking new ground as an assistant professor in the City College of New York’s School of Education. 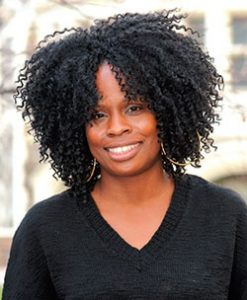 Back in New York since 2012, Watson has initiated new programs to assess student outcomes in different ways and to encourage parental engagement centered on today’s realities of urban families. She also has developed innovative partnerships to introduce students to professional careers.

Watson, who teaches in the department of leadership and special education, says her research is solution-oriented.

“We already know what our challenges are,” she tells Diverse. “I want to see what we can do to change these realities and which programs and initiatives we can start to help improve outcomes and experiences.”

Watson is conducting a grant-funded longitudinal study of the leadership practices in a large, predominantly Latinx and Black high school. In a research-practice partnership, she works closely with the school’s leadership team to strengthen parent engagement and school-community relations in ways that support student success.

“I’m working with principals and their leadership teams to develop best practices,” she says. “It’s not just me coming in and saying what’s wrong. It’s me working with the team saying what can we do better, what can we do differently, what have we learned from these challenges and what did we do well so that we can continue to build on that?”

Watson also began a dialogue with young girls. “Actually, they were interested in talking to me,” she says. “They wanted to tell me their stories, and I was honored. They wanted to be heard. It was eye-opening in many respects.”

Watson recalls it as an important step in her scholarship. “We owe it to ourselves as scholars of color, particularly women, to reach back and talk to other Black women and girls. …Talking to them just kind of reaffirmed my commitment.”

The conversations led to “Talking Back: The Perceptions and Experiences of Black Girls Who Attend City High School” in a special summer 2016 issue of The Journal of Negro Education.

Watson says a weekly chat session evolved from the study.

“We were done with the interviews and they said they wanted to continue to meet on Fridays,” Watson recalls. “That let me know how much those meetings were needed.”

She said the sessions remained informal and focused on whatever issues the girls wanted to discuss.

Watson’s research also has examined the relationship between urban schools and parents, and again she questions existing concepts and practices. In 2015, she published an article in the journal Leadership and Policy in Schools titled “Reframing Parent Involvement: What Should Urban School Leaders Do Differently?” In it, she and co-author Ira Bogotch challenged the “unintentional misconstruction” of the concept of parent involvement that school leaders most often apply to Black and Hispanic parents in urban schools. The researchers offered “alternative ways of knowing and practice in order to increase parent involvement and student achievement.”

If Watson comes across a need, she looks for a way to fill it. An example is the G.O.O.D Project, which she co-founded with Erica Friedman, deputy dean and medical professor at the CUNY School of Medicine at CCNY, with grant funding from the West Harlem Development Corp. Last year, Watson was honored by Manhattan Borough President Gale A. Brewer for co-creating the project, which stands for Growing Our Own Doctors. It seeks to increase the number of “home-grown” high school students who pursue careers as health professionals, focusing on students at CCNY-based A. Philip Randolph Campus High School and connecting them with professionals at the medical school.

On a national level, Watson is working on a policy brief centered on Black women and girls, commissioned by the Congressional Black Caucus Foundation.

A leading scholar on educating Black males welcomes the research being done by Watson and others on Black girls. Dr. Shaun Harper, who produced the pivotal 2012 study “Black Male Student Success in Higher Education” while he was director of the Center for the Study of Race and Equity in Education at the University of Pennsylvania, said in a 2016 Education Week interview that Black girls also deserve attention from researchers.

“As most of the nation knows, so much attention has been given to Black boys and men over the past 20 years or so in education research,” said Harper, who is now at the University of Southern California’s Rossier School of Education. “So it is refreshing that we are now seeing a rightful inclusion of Black girls and women because they are often pushed out of schools in some uniquely gendered ways that have not been fully considered.”

Watson is playing a vital role in that “rightful inclusion” through her scholarship as well as her community involvement. When asked if she considers herself a scholar-activist, Watson tells Diverse, “Oh, that’s definitely who I am. I have an agenda…My work is in the community. My job is to get out here and tell our story and to change our reality.”

This article appeared in the June 28 issue of Diverse magazine.