When some of the nation’s top scholars decided to pen a book examining the life of Dr. Melvin C. Terrell and his contributions to the field of student affairs, Terrell knew that was something special.

But then again, the life of the former Vice President for Student Affairs and Professor of Counselor Education at Northeastern Illinois University has been nothing short of extraordinary, which is why in retirement, he’s become the subject of a new Festschrift — “a time-honored academic tradition that recognizes the retirement of a noted and celebrated scholar by other scholars contributing original work to a volume dedicated to the honoree,” says Dr. Jerlando F. L. Jackson, one of the co-editors of Advancing Equity and Diversity in Student Affairs, the Festschrift in honor of Terrell that was released late last year. 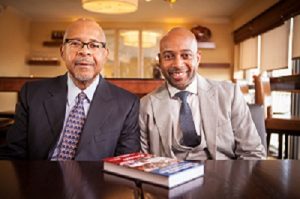 Historically, Festschrifts were popular in Europe, emerging in the nineteenth century with education being “among the research disciplines minimally engaged in the Festschrift tradition, and African-Americans less so to be honored in this fashion,” says Jackson, who is the Vilas Distinguished Professor of Higher Education and the director and chief research scientist of Wisconsin’s Equity and Inclusion Laboratory at the University of Wisconsin-Madison. “As a student of academic tradition, I became even more determined to see the life and accomplishments of a Black male to be filed away in the annals of the academy alongside other academic giants.”

Indeed, Terrell, who retired in 2008 at the age of 59 after a 20-year tenure as Vice President for Student Affairs at NIU — the longest tenure for an African-American in that position at a predominantly White institution — is seen as an academic giant, a walking model for how colleges and universities should approach equity and diversity work in student affairs.

Along the way, he mentored a legion of scholars and practitioners, becoming an embodiment of what noted scholar Dr. John H. Schuh calls the “scholar-practitioner.”

“He was one of the original architects for student affairs and academic affairs working together,” says Jackson, noting that at one time — not too long ago — the work of student affairs was largely considered inferior to the academic side of the house. “And what he did, by being able to speak the language and be contributor to the academic mission, he was able to build bridges that others were able to see, follow, model and cross over.”

Even during his tenure at NIU, Terrell simultaneously was a full professor in counselor education while serving as vice president for student affairs.

“It’s unusual for a vice president to also be a full professor,” says Terrell, who now lives in Florida. “But apparently, I’m an unusual person.”

A commitment to education

Growing up on the west side of Chicago, Terrell’s parents — Cleveland and Ethel Lee — emphasized the importance of education for their six children: Lawrence, Doris, Eugene, Carol, Francine and Melvin, who was the eldest.

“In the household, I was a serious student, even as a youth,” recalls Terrell, who remembers rising around 4 a.m. every morning to study because the house was quiet. After attending Catholic elementary and high school, Terrell matriculated into Chicago State University, where he completed his undergraduate degree in two years and ten months. After he graduated with a degree in history, he taught seventh-grade social studies at an inner-city elementary school in Chicago for a year and then went on to enroll in a master’s program at Loyola University Chicago with a focus in higher education administration. Later, he enrolled in a doctoral program at Southern Illinois University at Carbondale, earning his degree at the age of 28.

Terrell made a seamless tradition into academia, working in a variety of positions ranging from coordinator/counselor of Black affairs to director of academic success, to director of learning development at a variety of institutions across the nation.

After stepping down as the director of Minority Affairs at the University of Toledo, Terrell was named vice president for student affairs at NIU and had oversight over dozens of departments and programs, including athletics.

When he wasn’t working at his administrative job, Terrell was active in professional organizations like NASPA and NASAP — two national associations for student affairs personnel. He was also churning out peer-reviewed articles and co-authoring books with his contemporaries and his protégés, such as How Minority Students Experience College: Implications for Planning and Policy and Enhancing Student Learning: Setting the Campus Context.

“I could have gone to work and gone home. But I didn’t want to do that,” says Terrell. “I wanted to do something that was not only practical, but I always wanted to do research that could help and leverage the importance of diversity, minority student retention, campus violence, equity, all these various topics in the academy.”

Passing on legacy to new generation

Jackson and his co-editors, Drs. Lavar J. Charleston and Cornelius K. Gilbert, say that as college administrators grapple with the myriad of problems from student unrest to free speech issues on campus, they would be wise to study the work of Terrell. They say that the book serves two foci.

“There wasn’t a comprehensive text that dealt with equity and diversity in student affairs. So that was a void,” says Jackson, adding that the volume includes chapters from well-known academicians such as Drs. Doris Wright Carroll, Walter M. Kimbrough, Terrell L. Strayhorn, D. Jason DeSousa and Fred A. Bonner II. “The second was the post-script. The Festschrift piece was that individuals would be able to communicate in a way the role that [Terrell] had in their life, developmentally and professionally. I don’t believe we have anyone in this book who is not connected to him in some way.”

Dr. Shaun R. Harper, the Clifford and Betty Allen Professor of Education and director of the Center of Race and Equity at the University of Southern California, said the book is a must-read for those interested in pursuing the equity and diversity lens in student affairs and helping to move the needle.

Harper recalled meeting Terrell as a sophomore in college at a NASAP conference and was amazed by how accessible he was.

“In many ways, having access to a role model of his caliber during the formative years of my career is something that I’ll always appreciate and be indebted to him for,” says Harper.

Jackson agrees: “Unlike many of his contemporaries, he was one of the few who saw it as part of their role to uplift the future generation of scholars and practitioners.”

Others tell similar stories about his mentoring across the years and point to Terrell as someone who singlehandedly reshaped the director of student affairs role that allowed more practitioners of color and researchers of color to follow behind.

Terrell, who exercises at least six days a week, spends much of his time traveling internationally, reading and attending the theater and museums. He also runs a foundation in his name, which raises funds for minority graduate students.

“I’ve had a full career and I’ve turned down positions,” says Terrell. “I’m not interested in working anymore.”

Still, he remains appreciative that his body of work has been memorialized in a 438-page text.

“It was humbling,” he says of the Festschrift. “I wanted to do more than have a job and get a good paycheck. I wanted to do research and I wanted to travel and make a difference in the academy.”

This article appeared in the June 28 issue of Diverse magazine.