Despite the obstacles Jorge Mendez Barcelo faced as an immigrant from Mexico, who arrived in the United States in 2007 at the age of 15, he was able to earn his master’s degree in business administration and establish his own business. 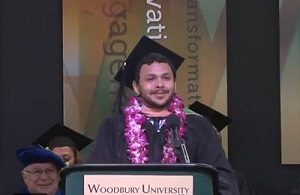 After a family crisis forced him to leave behind his hometown of Villa Juarez, Mendez and a sister traveled to Panorama City, California in order to pursue life in the United States.

“It was a culture shock,” said Mendez. “I’m from a very small town, less than 500 people lived there, so coming here was a shock for me. The culture, the people, the way everybody acted was all very different. Also, with my parents being in Mexico, being lonely was part of it for a little bit, for a couple months.”

With no knowledge of English upon his arrival, Mendez was able to learn in just six months by taking ESL classes, attending Saturday classes and adult school.

Since Mendez was an undocumented immigrant at the time of his arrival, he did not qualify for financial aid. Thus, he started running cross country and track in high school in order to try to earn a scholarship from a university.

“I had good grades and was actually good at running, but because I couldn’t apply for financial aid, a lot of coaches didn’t offer me anything because it would be expensive for them to actually acquire me,” said Mendez.

When Mendez had almost given up on his dream of a scholarship, he received a call from Hawaii Pacific University, where he was offered a full-ride athletic scholarship. There, he earned a degree in accounting.

Once he graduated from Hawaii, Mendez wanted to further pursue his education. He chose to attend Woodbury University for an MBA because of its small size, which he hoped would provide him with more networking opportunities.

While he was in school, Mendez entered a competition for his business class, where he presented his idea for B&O Business and Tax Consultants Inc. Currently, Mendez works for Robert Half while his business remains his side project. However, he hopes to eventually work full-time on his business.

“What pushed me to actually start it was that fact that the judges liked my idea, and one of the judges was so interested that they decided to invest and endorse my business,” said Mendez. “That was my epiphany, that I realized that this would actually work.”

Despite the fact that it is legal for Mendez to work under his permit, he continues to face the current challenges from President Donald Trump’s administration. Under the Deferred Action for Childhood Arrivals (DACA) policy, Mendez received a work permit in 2013 but is not permitted to leave the country. Thus, he sees his family only once a year for a short period of time when they visit him in the U.S.

When Mendez was asked to be Woodbury’s commencement speaker at his graduation this past year, it almost brought him to tears because his family would be able to experience all of his accomplishments with him.

“It meant a lot to me because my grandpa had recently died, so I wanted to dedicate it to him and my dad, who is sick with cancer,” said Mendez. “It was my opportunity to show my parents what I would do in an academic environment, because even though they are very supportive, because they live in Mexico, they only come and visit for a limited time, so they were never able to see me in any academic competitions or athletic competitions. That was the first time that they actually saw me doing something that I liked and that was meaningful.”

Dr. Satinder Dhiman, who taught and advised Mendez at Woodbury, encouraged him to apply to give a graduation speech.

“[Jorge] had a story,” said Dhiman, who is the associate dean, chair and director of the MBA program at Woodbury University’s school of business. “He not only had a story, he had a narrative. His narrative was something which created context when we listened to him and the context was something that the viewers would be able to relate to. He was able to do so, through his background and through his struggles in the United States. So, his narrative was compelling and it was relevant and it created resonance with the audience. So, that’s why we selected him.”

Within the next year, Mendez hopes to attend law school in the Los Angeles area.

“My main goal is to help small businesses grow and give them advice and give them the services that they need, the tools, basically, for them to grow, especially here in San Fernando Valley,” said Mendez. “So, going to law school would give me further knowledge to help them financially, but also legally.”

The Minority Incentive for Community College