Seth Owen, a high school valedictorian from First Coast High school in Florida, who said he was shunned by his parents because of his sexuality, can now attend college in the fall thanks to a GoFundMe campaign. 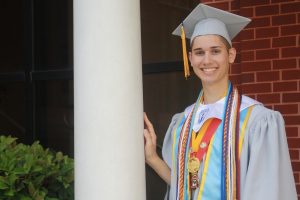 The campaign was started by Jane Martin, one of his teachers. After hearing that Owen was worried he wouldn’t be able to afford Georgetown University’s tuition since he couldn’t rely on his family for financial assistance, she wanted to see if donors could help pay for his first year’s tuition.

Owen, who graduated high school with a 4.16 GPA, was sent to conversion therapy by his parents after they discovered he was gay during his sophomore year, he told NBC News.

This past February, Owens asked his parents if he could stop going to their church, saying it has anti-LGBTQ+ rhetoric and philosophies. Shortly after, his parents gave him the ultimatum: remain in the church or move out of the house.

He ended up moving out, he told NBC News, “for his own sake”. Later, Owens received a Georgetown tuition package and realized he couldn’t afford to go to the institution on his own.