Security analyst, systems administrator or cybersecurity engineer are just a few names of the approximately 350,000 cybersecurity jobs that went unfilled last year. That number of job openings is expected to reach 3.5 million by 2021, according to a report by Cybersecurity Ventures.

As a high demand for skilled laborers in cybersecurity and information technology continues – and concerns surge about the nation’s national security – historically Black colleges and universities (HBCUs) have stepped up to train their students for the jobs of the future. Across the country, HBCUs and predominantly Black institutions (PBIs) recognized the need to build capacity and diversify the science, technology, engineering and mathematics (STEM) fields. Several institutions now have emerging cybersecurity programs, while others – such as Norfolk State University – are expanding their training initiatives and programs with new resources and research facilities on campus.

“It is well known that HBCUs produce the most Black STEM PhDs,” says Dr. Aurelia T. Williams, chair of the Computer Science Department at Norfolk State. “If we are to fulfill those cybersecurity positions with a talented and diverse pool, then HBCUs must be part of the equation.”

Data from the Bureau of Labor Statistics (BLS) indicates that the cybersecurity profession, particularly information security analyst jobs, is projected to grow 28 percent between 2016 and 2026, much faster than average for all occupations. Most of the available positions will require a bachelor’s degree or similar industry-based certifications.

As a result of predicted cybersecurity employment shortages, demand for qualified workers has been categorized as an “emergency,” Williams adds. Cyberattacks are also expected to become more common, according to BLS.

Workforce and education leaders point out that it will take a combined effort from higher education institutions, states and business partners to bridge connections for students to enter in-demand roles with the skills and competencies employers need.

And significantly, Dr. Harry L. Williams, president and CEO of the Thurgood Marshall College Fund, says that HBCUs and PBIs will have to overcome the challenge of building enough institutional capacity to sustain the cybersecurity programs that will train students for the profession.

Part of building that sustainability will start with having faculty members trained in the latest developments of the cybersecurity field.

“The professional development of these faculties also includes active participation in various workshops and training sessions on curriculum development in emerging computer engineering areas such as parallel/distributed computing and artificial intelligence, among others,” Aglan adds. Tuskegee’s computer engineering degree focus makes it the first-ever program at an HBCU.

Existing electrical, computer science and mechanical engineering courses will be combined with 22 new credit hours of computer engineering courses. Students will satisfy the degree’s requirements by completing 128 credits in the program. The program officially launches this fall.

Aglan says that courses for the cybersecurity-focused degree were “judiciously selected” by a committee of current faculty, two Tuskegee engineering alumni and an external faculty member, Dr. David Kaeli of Northeastern University’s Department of Electrical and Computer Engineering. Committee research solidified the university’s decision to keep program enrollment to 25 students per year to increase student support and success in a nurturing environment.

Furthermore, faculty and administrators in the new program already have set outcomes and expectations for students.

“Upon graduation, students will be able to demonstrate technical breadth and depth in modern computer engineering areas and become highly-competitive for technical [and] engineering positions with government and private employers,” Aglan says. “Among other computer engineering skills, graduates will be able to one, test and evaluate the security systems of organizational computer networks, and two, devise and effectively communicate cybersecurity solutions and policies.”

CWDP will train students in computer networking and cybersecurity, and will also include training for specified Computing Technology Industry Association (CompTIA) certifications. Each of the schools will receive a grant of $2.5 million from the Maryland Higher Education Commission for the program.

“This effort goes a long way to make certain that graduates of our institutions are armed with a degree, a cyber certificate and immediate earning potential,” says Thompson, Coppin State’s president. 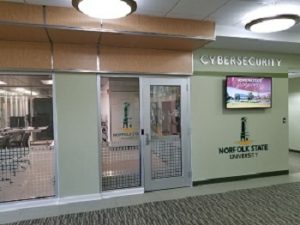 New space for the study of cybersecurity at Norfolk State University.

That Maryland is home to a large cyber-business community – including the National Security Agency (NSA), National Cybersecurity Center of Excellence (NCCoE), US Cyber Command, Defense Information Systems Agency (DISA), National Institute of Standards & Technology (NIST), Army Research Lab and Cyber Command, among others – is not lost on higher education officials who are aware of the dire need for cybersecurity professionals in the region.

“Our goal at Coppin State is to prepare our students to meet workforce demand,” Thompson says. “This [CWDP] initiative poises Coppin State to do just that.”

Coppin State students will get training in soft skills, too, so that they are competent in critical thinking, teamwork, anticipating need, problem-solving and sound decision-making, which ensures that “an employer can be certain that a graduate with those skills will be successful in their company,” Thompson says.

The federal Department of Defense funded the complex, in part, and the facility will house the university’s Center of Excellence for Cybersecurity. Research labs and data centers will provide training to 120 students in areas such as digital forensics, cloud computing, wireless security and intelligent intrusion detection systems.

Norfolk’s cybersecurity initiatives began in 2003 with a Master of Science degree in computer science with an emphasis in Information Assurance – the precursor to cybersecurity, says Williams, the complex’s director. The early stages of the program began when graduates in the early 1990’s entered federal agencies and gained exposure to computer security.

“Those alumni were able to share with then-faculty the importance and significance of the emerging field,” she says. “A few alumni returned to the university as faculty to help with the establishment of the cyber initiative.”

Over the years, NSU added a track in the Bachelor of Science computer science program, added a new M.S. in cybersecurity and secured approximately $42 million in external funding to advance its cybersecurity programs.

And in 2015, NSU served as the lead institution for the Cybersecurity Workforce Pipeline Consortium, an effort from the Department of Energy and former Vice President Joe Biden to advance cybersecurity education at minority-serving institutions. The initiative granted 13 HBCUs, two national labs and a K-12 school district with a share of a $25-million grant over five years.

Williams adds that since the institution became an NSA/Department of Homeland Security Center of Excellence in Information Assurance Education in 2009, students have flocked to the undergraduate track of the computer science degree program. Expanded capacity due to funding has also increased opportunities and access for students to participate in internships with the school’s government and corporate partners, she says.

“This program welcomes students from non-technical degrees,” Williams says, “therefore students with bachelor’s degrees in liberal arts disciplines like psychology and sociology are a large contributor to a population that was previously untouched.”

As with other cybersecurity programs, Norfolk State expects students to have knowledge and experience with the latest techniques and tools used in the cybersecurity discipline.

Students are also encouraged to take advantage of internships, conduct research with faculty and apply their classroom skills to other experiential learning opportunities. The new cybersecurity complex will help the institution expand its engagement in research activities.

With focuses on cloud-enabled, big-data-analytics-capable Cyber Analysis, Simulation and Experimentation Environment (CASE-V), mitigation and forensic analysis capabilities to defend against future advanced threats and methodologies and techniques in cyber intelligence and cyber defense, Norfolk State computer science faculty are preparing their students for the future.

“HBCUs must have the resources, capabilities and educational opportunities to allow our students to compete,” Williams says.