Despite a recent leak of uncomplimentary “confidential documents,” trustees at Saint Augustine’s University say that they remain optimistic as a subsequent review for accreditation approaches.

“On behalf of the Saint Augustine’s University Board of Trustees, we are excited about the start of a new academic year,” the board’s chairman, the Rev. Dr. Hilton O. Smith, said in a statement released by the university. “We continue to support the direction the university’s administrators are taking to prepare for the university’s removal from probationary status with the regional accreditation agency.” 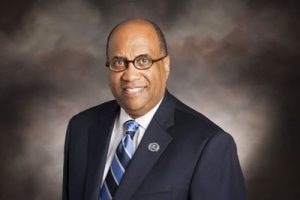 Saint Augustine is accredited to award baccalaureate degrees by the Southern Association of Colleges and Schools, Commission on Colleges (SACSCOC). However, for the past several years, the university has been monitored for deficiencies in several areas, including financial resources and stability, institutional effectiveness: educational programs, and control of finances.

A university spokesman for the university did not respond to inquiries seeking comment.

Probation is the most serious public sanction imposed by SACSCOC’s Board of Trustees short of the loss of accreditation, according to information on the official website of the regional accrediting body in the 11 Southern states for institutions of higher education that award associate, baccalaureate, master’s, or doctoral degrees. The maximum consecutive time that an institution may be on probation is two years. In December 2018, Saint Augustine’s University will have been on probation for two years.

“Commission staff will not speculate on what decision might be made by SACSCOC’s Board of Trustees in December 2018,” said a spokesman for SACSCOC,

Speculation about the future of the university that was founded in 1867, has forced the leadership to respond.

“While it is unfortunate that confidential documents were distributed, with the intent of damaging professional reputations and the image of the university, the university’s administration, faculty, staff and students, along with the board, will not be deterred in our quest to insure the future and viability of this 151-year-old institution,” Smith’s statement read. “The university’s future remains extremely bright. The university has experienced increased donor giving and infrastructure improvements. Additionally, student enrollment continues to climb.”

The leaked report also revealed mixed performance reviews for Dr. Everett B. Ward—who was unanimously chosen as Saint Augustine’s president in April of 2015—a charge that Smith disputes.

“The board’s support for Dr. Ward and the administration has never been stronger,” said Smith. “We are committed to ensuring that the university continues to be an intellectual community that prepares students for leadership roles in a global society.”

Ward is a previous member of the university’s board of trustees, serving as chairman from 2009 to 2011. He is also the current president of Alpha Phi Alpha Fraternity, Inc. Some of the performance evaluation comments contained in the confidential report suggested that Ward was neglecting his university duties as a result of his fraternal responsibilities.

“It appears Ward is trying to do a good job. He really loves both the university and the fraternity. He has a lot of support from both,” said Dr. John T. Larkins, the national president of Saint Augustine’s Alumni Association and Ward’s fraternity brother. “We have come a long way from three years ago to where we are today. The university has overcome a lot of obstacles,” said Larkins, a 1966 alumnus of the university.

Larkins said the leaked internal documents do not tell the whole story of the university’s current situation and should not have been shared.

“I think it was an unfortunate breach of privacy,” he said. “There is a process on the board where milestones are set and goals are established – some things are put in confidence,” he explained. “Even if the documents were correct, they have to be put in the proper context.”

He sees the leak as an attack on HBCUs in general and Saint Augustine in particular.

“I work with churches, schools and other organizations to help get young people into college,” said Larkins. “There is a big need for HBCUs now especially considering our political climate. We have a role to play for the next 150 years to keep our institutions going. A lot of people are not interested in talking about saving our institutions.”

“I’m really tired of seeing all the negativity today. I just want to talk about the positive,” he said. “…We are excited to see our new incoming class of 2022 and our returning students coming back this week. Just want to let you know we support and stand by our Saint Augustine, our institution. We stand by our president Dr. Everett B. Ward and we are not going to take any attacks toward him.”

The Top 100: Interpreting the Data