A Gallup survey of Virginia Tech students suggests that they are more likely than the average American college student to thrive during their time on campus in terms of engagement, participation in activities outside the classroom, looking out for each other and well-being in general.

The poll of 2,041 sophomore, juniors and seniors last fall represented 10 percent of Virginia Tech students in those grades and builds on a 2015 Gallup survey of graduates. 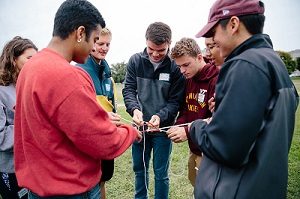 Virginia Tech President Dr. Timothy D. Sands said the survey findings indicate that the land-grant school’s “foundational values remain strong in our current undergraduate population, and our efforts to advance experiential education, diversity, and inclusion are aligned with needs of our students, our community, and the commonwealth.”

Sands has set a goal that 40 percent of the incoming students will consist of underrepresented, first-generation or lower-income students by 2022, and the Office for Inclusion and Diversity and other departments have instituted a series of initiatives to make it happen.

The Faculty Women of Color in the Academy National Conference takes place at Virginia Tech, and the university hired 30 new underrepresented minority faculty members to begin this fall. More than 500 students of color participated this summer in pre-college summer programs for rising high school juniors and seniors, including the Black College Institute, the Hispanic College Institute, Native American Outreach and the College Access Collaborative.

The school also is removing entry barriers to underserved and underrepresented students in its application process, including shifting its calendar to provide students an earlier notification of an acceptance decision, allowing self-reporting of transcripts to lower costs and building more support for scholarship students beyond their first year.

Virginia Tech also is adopting an application model developed by the Coalition for Access, Affordability, and Success that gives applicants more opportunity to communicate factors that don’t necessarily show up in grades, extracurricular activities or test scores.

“The most important aspect of all of this is that it’s about removing barriers, not lowering standards,” said Luisa Havens Gerardo, vice provost for enrollment management, when the new application model was announced in June. “One of the most difficult challenges I’ve encountered as an enrollment manager who’s a true believer in access is actually translating to people that access and excellence are not mutually exclusive. It is about finding that high-potential, brilliant student and provide not only access but also the opportunity to realize that potential.”

Realizing My Potential Through the Higher Education Opportunity Program

Was It Worth It? A McNair Scholar’s Reflection