Facing problems that stemmed from isolation as the lone African-American student, Dr. Juan E. Gilbert was near the end of his Ph.D. program in computer science at the University of Cincinnati and on the verge of quitting.

But then he met Dr. Andrea Lawrence, chair of the computer science department at Spelman College, who introduced him to a community of other Black computer science Ph.D. students. That motivated him to stay in the program and finish, and as an academic he’s been committed to helping others facing similar struggles. 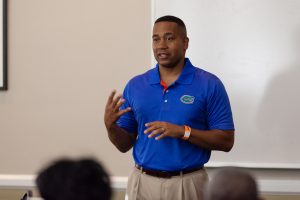 As the principal investigator for a National Science Foundation-funded program called “Broadening Participation in Computing,” Gilbert is part of a large-scale project, the Institute for African-American Mentoring in Computer Science (iAAMCS), which has developed a document to help schools recruit and retain African-American doctoral students in computer science.

“The reception has been very positive,” said Gilbert, the Andrew Banks Family Preeminence Endowed Professor at the University of Florida, where he also is chair of the computer and information science and engineering department in the Herbert Wertheim College of Engineering.

“All the research we have done and findings clearly show that if you want to be effective in recruitment, retention and matriculation of those students, you have got to provide mentoring. If you want them to fail, you isolate them and give them no mentoring,” said Gilbert.

With assistance from the Computing Research Association (CRA) based in Washington, D.C., the guidelines will be distributed to more than 200 universities that have Ph.D. programs in computer sciences and computer-related organizations and professional societies. There also will be an article in an upcoming issue of the association’s online publication, Computing Research News, said Erik Russell, CRA’s director of programs.

Russell added that the guidelines project is the latest initiative in the association’s collaboration with iAAMCS.

“Many of our programs aim to help students strive for and attain advanced degrees in computing,” said Russell. “We are dedicated to talent development and creating a diverse workforce that is equipped to meet the needs of our society, and iAAMCS has been a wonderful partner in these endeavors.”

Dr. Suzanne T. Ortega, president of the Council of Graduate Schools (CGS), said the guidelines are “spot-on” and “extremely promising” and can help underrepresented minority students across disciplines.

“The bottom line is the guidelines … are absolutely consistent with previous research that CGS has done on the completion of underrepresented STEM students,” she said. “As is always the case, the big challenge is how we get more faculty and more degree programs to implement them. Universities and programs and funder’s need to change their reward structure to recognize high-quality and high-impact mentoring.”

Until that happens, Ortega added, the reliance is on “passionate, committed champions who influence their colleagues and peers and inspire them to do a better job mentoring the next generation of scientists and scholars.”

Gilbert, who says his Human-Experience Research Lab at University of Florida is the nation’s top producer of Black Ph.D. computer science graduates, has mentored 15 Black Ph.D. computer science students to degree attainment. He says he doesn’t want Black students who pursue the degree to endure the loneliness he did, which can create other problems that lead to degree in-completion even when the student is capable of doing the work.

“When I was getting my Ph.D., I had never seen another African-American with a Ph.D. in computer science,” he recalled. “It was very isolating.”

He began to socialize with Indian and Chinese classmates and noticed that they were not experiencing the same problem.

“I learned that they had a community, and it helped them through the program. I didn’t have a community, so it was much tougher for me.”

But with guidance from Lawrence, Gilbert built his own supportive community.

“It changed my life forever,” he said.

And now he’s helping other underrepresented students in the field build their communities so that they can achieve their goals.

Geographical Bias in Testing: Is Cultural Bias a Problem of the Past or Are We Simply Not Looking in the Right Space?