WASHINGTON – Deanne Loonin, an advocate for low-income student loan borrowers and an attorney with the Harvard Law School Project on Predatory Student Lending, has a suggestion for the U.S. Congress in response to the federal student loan debt crisis. 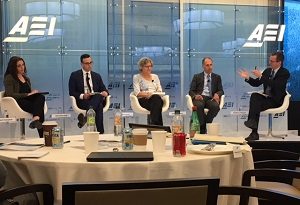 “Discharge it” – all federal loans, not just those in default – in a comprehensive cancellation process “and start all over again” with a system that works better for students and the government, she said during an event Thursday at the American Enterprise Institute (AEI), where two research reports were unveiled that examined the national default crisis.

Every quarter, according to the Urban Institute study, about 250,000 borrowers of federal direct loans default, with another 20,000 to 30,000 who had been in default and come out, defaulting again.

Yet, as panel participants told nearly 50 guests, little is known about why borrowers default.

More is known about who is likely to default: low-income students and students of color.

Blagg’s study of federal student loan defaults – one of the first to use credit score data – added to the profile. Her research found a positive correlation between a student having other debt in collections, such as medical or utility bills, and likelihood that he or she will default on federal student loans.

“About 59 percent of borrowers who defaulted on their student loans within four years had collections debt in the year before entering student loan repayment” compared to 24 percent among nondefaulters, according to the report. “Those who will default on their student loans are more likely to reside in neighborhoods that have more residents of color and fewer adults with a bachelor’s degree or higher, but a borrower’s personal credit profile is a stronger predictor of default than the neighborhood where she resides.”

Income-based repayment options, she found, have not solved the problem.

The average credit score of a defaulting students drops an average of 50 to 90 points in the year or two prior to the default, the report stated, but those who default usually have fair to poor credit scores even before they are supposed to enter repayment.

· Use credit scores to better target student loan repayment assistance, as a low credit score shouldn’t keep a student from getting a federal loan and credit score could be used as an impartial way to provide additional assistance for borrowers at a higher risk of default as they enter repayment.

· Consider reshaping the way deferred, delinquent and defaulted loans increase a borrower’s total student loan balance because interest never stops accruing on the loans and can substantially increase the student’s debt. At the same time, revisit and consider modifications to interest and fee structures to encourage rather than discourage repayment.

· Focus on discharge remedies that reach the highest-need borrowers, for example partial or full discharge for borrowers who spent several years in a social safety net program after leaving school.

· Develop better measures of student loan acquisition and repayment, since analyzing data from only one cohort of borrowers ignores the multiple paths borrows can take in managing student loan debt.

Noting various ways to cure a default, Delisle said borrowers should be made aware of all options and the process should be made fairer and simpler so that everyone is treated similarly regardless of which option they exercise.

“It’s something the policy community needs to wrestle with,” he said.

Noting that prior analyses have tended to focus on why borrowers default and how to prevent it, the AEI study explored what happens to students after they default and how data can inform policy reforms related to the collections process.

Like the Urban Institute study, it raised more questions than it answered.

“Overall, our findings suggest that the popular impressions of borrower outcomes after default, even among policymakers and researchers, are overly simplistic,” according to the report. “There is no one typical path borrowers follow after defaulting on a federal student loan. While some borrowers stay in default for years, others leave default quickly. Some borrowers see their balances rise throughout their time in default, while others pay down their loans in full.

“These outcomes do not always correlate the way one might expect: A borrower who has exited default often has not repaid his loan (although he may eventually), and a borrower still in default is often making rapid progress toward fully repaying his debts.”

Borrowers who exited default five years after entering it were most likely to be White, to have attended a two-year public school, and to have owed less than $5,000 at the time of default.

“There’s still a lot we really don’t know” about why people default and what motivates them to reengage with the system later, said Alexander Holt, a policy analyst at the Pew Charitable Trust.

Given the still limited data about borrowers who default on federal student loans, panelists agreed that more research – including longitudinal hard data and examination of loan counseling and servicing – is needed, as well as reform.

Loonin described the current state of affairs as “irrational, illogical and kind of a mess,”

Colleen Campbell, associate director for postsecondary education at the Center for American Progress, concurred with Loonin about discharge, suggesting a “targeted” way of doing it. She said it is “unfair to look at loans for everybody” and indicated that it is a matter of funding equity and “leveling the playing field” in terms of access.

The costs of default are hard to quantify and go well beyond the dollars defaulters must repay, some noted.

In conjunction with that, more research needs to be done on racial disparities in the system, said one attendee, Dr. Charles Burt. He is the student loan and foreclosure ombudsman in the banking bureau of the D.C. Department of Insurance, Securities and Banking.

Noting that about 10 percent of D.C. residents owe more than $100,000 in student loans, he said  such “crippling” debt impacts a person’s ability to save, maintain or buy a home, start or support a family and even work, as some states suspend or revoke the driver’s licenses and some professional licenses of individuals who default on federal student loans.