Ever since he was a teenager, Dr. Lawrence Scott has lived by the motto that “success is measured in succession.”

“I’m the first in my family to go to college or a university, first to graduate and first to get a terminal degree,” says Scott, an assistant professor of educational leadership at Texas A&M University. “So I don’t just want degree attainment, but I want to make an impact, I want to effect change.”

Scott hasn’t always been so positive. He experienced hardships growing up on the east side of San Antonio in what he calls a “trap house.” There, he experienced high poverty for most of his childhood, was exposed to bad influences and was even homeless for a while. 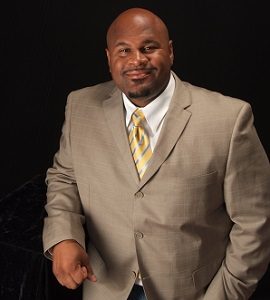 The person who sparked Scott’s ambition and drive for learning was his basketball coach and English teacher, Mr. Bego, who taught him about success and how to impact others.

“He was the archetype I needed to see,” Scott recalls. “He was married, he had kids, he was writing books, he was successful, he was a Black man. Well, transition 15 years later, here I am doing the same thing.”

In addition to being a college professor, Scott is the executive director of the Community for Life Foundation, a scholarship fund that was founded by his pastor and mentor. The foundation has given over a half of a million dollars in scholarships to primarily underrepresented Black and Hispanic students and has frequent career-readiness workshops for students.

He was also involved in the Talented 10 Scholars, a contortion of Black male doctors who follow the 15 young men from ninth to twelfth grade.

“We’re making sure that the students are living numerous lifestyles and teaching them how to cook, teaching their parents how to cook healthy meals and everything,” says Scott. “It’s this holistic approach, but I’m able to do that back in my old neighborhood that was inundated and infested with drugs and gangs. And now we’re inundating and assessing them with positivity and role models.”

His work within the community has yielded results, but the journey has not been easy.

“What we did is we took the hardest school with a high concentration of African-American boys and we said ‘What are some of the issues?’, and we basically mentored them every week from 9th grade to 12th grade. 100 percent of them graduated,” he says.

“These are kids that everyone said ‘they’re not going to make it’. Not only did they make it but they all graduated, and some went into the military.”

Dr. W. Sean Kearney, interim dean of the College of Education and Human Development at Texas A&M University at San Antonio, says that Scott has had an impact on both the college and the surrounding community.

“Dr. Scott is actively engaged in the local community,” says Kearney.  “This enables him to blend theory with practice so that his research is grounded in reality and relevant to practitioners.”

Kearney says that students at Texas A&M are drawn to him.

“He can often be seen after class, in the hallway or in the parking lot engaged in extended conversations with students who would rather continue the classroom discussion than hurry home,” Kearney adds.

Since beginning his tenure as a professor, Scott has taught several graduate-level courses such as Elementary and Secondary Schools and Administration of Various Special Programs. But his favorite courses to teach are Multicultural Education for Educators and School and Community Relations.

“My job has been to get rid of that misnomer that the professorial is all about the theory and writing books and journal articles,” Scott says. “But it’s also about engaging your communities.”

In these classes, Scott has had the opportunity to push his students and has provided them access to a variety of speakers including school board executives, the mayor, parents, city councilmembers and other legislators to address a myriad of issues ranging from anti-bullying and anti-cyberbullying.

He recently took some of his students to Spain to study the history and origin of the city of San Antonio.

“The coolest thing is you got to see students, and they now understood the importance of their own culture,” says Scott, who is married and the father of two children. “A lot of students we took were Hispanic,” he says. “The vast majority of our students were Hispanic and they got to see their origins from Spain to Mexico, that you are building blocks of architects of who we are today.”

Monica Levitan can be reached at mlevitan@diverseeducation.com.

Professor Said University of Iowa Retaliated Against Him for Testimony