Campus projects focusing on pre-preservation studies, architectural plans and specifications, historic structure reports and the repair and rehabilitation of historic properties according to the Secretary of the Interior’s Standards for the Treatment of Historic Properties were eligible for HBCU Grant funding, according to NPS.

“HBCUs have played an important role in our country’s pursuit of equality, civil rights, and higher education for all Americans,” said National Park Service Deputy Director P. Daniel Smith. “These grants will help restore and enhance landmark buildings that are a source of pride on campuses in nine states.” 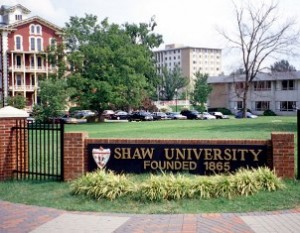 Funding for NPS’ HBCU grant program comes through the Historic Preservation Fund, which supports preservation of HBCU campus sites that are listed among the National Register of Historic Places.

“We are so excited to have the preservation funds to do much-needed rehabilitation to the building on our campus that bears the name of our Founder, Henry Martin Tupper and to preserve our iconic Estey Hall,” said Dr. Paulette Dillard, Shaw University’s interim president.