Dr. Georgina Dodge, who is associate provost for diversity, equity and inclusion at Bucknell University, likes to say that she was “born and raised in the Air Force.”

Her father served in the military for 21 years and once she turned 18, Dodge enlisted into the Navy as an electronics technician.

“No one believes me when I say I was a bit of a wild child, but I was,” says Dodge in an interview with Diverse. “I kind of needed to do something with myself.”

Her two primary duty stations were in Atsugi, Japan and Alameda, California. She also attended a variety of training schools in order to help prepare her for the use of cryptographic and meteorological equipment.

Though she grew up a military brat, being directly involved in the military changed her perspective as she was able to develop a number of life skills that would later become handy when she transitioned into academia.

“I got a lot out of my experience in the military including, of course, things that I certainly needed as a youngster,” says Dodge. “The ability to develop discipline, drive, resilience and responsibility. All of those types of things were pretty important and I think still serve me well.” 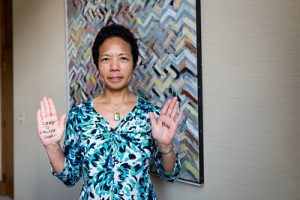 Being a woman in a male-dominated field was sometimes challenging for Dodge. Though many men, who she worked with, were simply focused on their job, others were “patronizing.”

“I joke that I really developed a good right hook,” says Dodge. “Sometimes that was necessary.”

Entering higher education was not always a focus for Dodge. She had “no background or even knowledge of higher education” when she first enlisted. However, while she was stationed in Japan, she began taking courses through the University of Maryland, College Park.

Her appreciation for learning also developed due to her experiences working with other individuals who came from backgrounds different from her own.

After six years in the Navy, she found that without a college degree, she could not find the work that she wanted in research and development. She enrolled at Golden West Community College in Huntington Beach, California with the original goal of majoring in electrical engineering or something similar. However, her career interest quickly shifted.

“As I started taking those required classes, I have always been a book worm and I fell back in love with the study of literature,” says Dodge. “I had wonderful professors who convinced me that I could use an English degree to become something other than a starving writer. So I took them up on that.”

As a first-generation college student, Dodge realized that she didn’t know the right questions to ask while in school.

Dodge received her associate degree from Golden West and then transferred to the University of California, Irvine.

One of her mentors later nominated her for a Mellon Fellowship in the Humanities which allowed her to attend graduate school at the University of California, Los Angeles (UCLA). She completed her masters and then Ph.D. in English.

After graduating from UCLA, Dodge became a faculty member in the English department at the Ohio State University, but soon realized that her skills were better suited for an administrative role. She became the vice provost for minority affairs and focused her efforts on maintaining diversity and inclusion initiatives across campus and within the local community.

After 14 years at Ohio State, Dodge became the chief diversity officer, associate vice president and Title IX coordinator at the University of Iowa. There, she also used her military background and taught a veterans transition course, which aimed to help with the transition process from military to higher education.

“This was a course that was designed to answer some of the questions that I wish I had known to ask and to provide some of the answers I wish I had when I did my own transition,” says Dodge.

When Dodge was hired, Bucknell Provost Barbara Altmann hailed her selection as a major coup for the university.

“Georgina’s record demonstrates that she is a fearless, values-based advocate who understands how matters of diversity, equity and inclusion operate in a university setting,” Altmann said at the time. “Her academic background and her real gift for addressing and working with a broad range of audiences make her exactly the right person to step into this position at Bucknell.”

Throughout the course of her career, Dodge’s interest in diversity issues stemmed from the literature that she was teaching and reading which “dealt with situations that confronted marginalized populations.”

In her new role, Dodge is focused on making Bucknell’s campus community an “inclusive space where people with all types of backgrounds, different ideas and different perspectives can come and be supportive with one another and be successful.”

In her new role, she has also made military students a focus of her work, outreaching to alumni who remain interested in developing veteran-based programming. They are looking to launch an inaugural kick-off event on Veterans Day.

“We haven’t determined exactly what we are going to do but we plan on starting small, of course,” says Dodge. “We hope to build up overtime and also hope to pull in some of our local community veteran’s organizations so that we could work with them and start partnering with them to ensure that the veterans we do get on campus have support and know where to go.”

While her career has led her to higher education, Dodge has missed some aspects of the military.

But she says that her current job enables her to help others.

“I want to always be of service,” says Dodge. “Helping people and particularly young people, really understand, appreciate and reach for their potential is something that I hope I will always be able to do. Whether it happens in the classroom, doing something active with sports on the field or in their careers or within their families, I hope that I am always able to be of service in that way.”

Her biggest piece of advice for other veterans or active-duty military is to pursue higher education.

“I would just like to encourage those who are in the military or those who are recently separated to really consider advancing their careers through higher education,” says Dodge. “Again, it was not something that I knew of or was familiar with as I was growing up and coming along. Higher education has opened so many doors for me and know that it will continue to do so. I would wish every veteran to have that experience.”

Regents Detail Secret Harreld Meetings During U. of Iowa Search