That was a recurring theme during “Higher Ed 2020: College Affordability Ideas for the Next Congress and Beyond,” an event hosted by The Century Foundation that brought policy experts together Wednesday at New York University’s D.C. campus. Panelists and speakers discussed reforms that could be enacted by the next Congress and beyond – including revisions when the Higher Education Act is reauthorized – to make college more accessible and affordable. 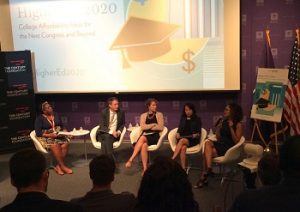 “One of the myths about higher education is that it’s the great equalizer, but it’s really not,” said Dr. Amy Li, speaking on a panel titled “Goals for the Next Big Thing in College Affordability.”

Li, an assistant professor of Higher Education and Student Affairs Leadership at the University of Northern Colorado, was referring to racial disparities in wealth and college completion and their effects on ability to repay student loans.

Discussions of so-called “free college” and promise programs must take such disparities into consideration in their rationale and formulation, Li added, noting that many states structure such programs in a way that ends up benefiting middle-income and upper-income families more than lower-income families, who need such aid most.

“They are financial aid repackaged and rebranded and styled into something that is politically popular,” said Li, who studies student loan debt. “They have the potential to increase equity and decrease disparities,” she added, and also noted the need to be reexamined in light of the reality that many students most challenged in repaying student loans often have the smallest loan amounts and did not finish school.

That’s disproportionately true among Black students, who generally have much less family wealth, much more educational loan debt and higher default rates than their White counterparts, research data has shown.

The struggle to pay loan debt, especially among lower-income students, “has a lot to do with whether they complete college” and has “a disproportionate impact on Black students, even when they graduate,” noted Dr. Tiffany Jones, director of higher education policy at The Education Trust. “We have to be thinking about debt solutions that specifically deal with groups affected by problems not always created by higher education, like racial wealth gaps. These things should inform policies.”

Removing financial obstacles to college is critical to improving access, particularly for academically able students whose only barrier to higher education is money, said panelist James Kvaal, president of The Institute for College Access and Success.

As more people question whether a college education is worth the steadily rising price being paid for it, “the degree of skepticism in higher education seems to be growing,” Kvaal said. “There are large gaps in completion, even among even academically talented students, based on income and race. Issues of student success are increasingly intertwined with issues of affordability.”

Policy reform also should look at the issue of affordability differently and refine its meaning, said panelist Dr. Julie Margetta Morgan, a senior fellow at the Roosevelt Institute. While students take a major risk – uncertain whether the investment in college and related loan debt will pay off later – thinking differently about affordability can help policymakers address vexing issues of inequity and unaffordability, she said.

“Maybe the question should be not ‘How much can a student afford to pay out of pocket?’ but ‘What is the value to the economy and our society?’”

Another theme was the necessity for federal-state partnerships in addressing the affordability issue. State disinvestment over the years has compelled schools to raise tuition to compensate for loss in funding. But even federal remedies such as increasing Pell grant amounts and forgiving some loans is not enough and more federal support is needed, several said.

“I would advocate for re-conception of federal-state partnerships in a way that we are investing together in college affordability,” said Kvaal, adding that states should expand their efforts and work with institutions to help ensure students graduate on time and are able to repay any loans.

Congress ought to look seriously at going outside HEA, rather than shifting around funds inside that allotment, to get additional revenue to address the affordability problem, suggested Mark Zuckerman, president of The Century Foundation.

“Those days of zero sum game, I think, are over,” he said in opening remarks.

In formulating higher ed policy going forward, speakers listed a range of other recommendations to achieve greater access and equity:

· Institutions, states and the federal government should respond to major trends in the labor market, because they provide a window into why much of the public is skeptical about the cost of college versus the benefits.

· Institutions should avoid raising tuition at a higher rate than the average family income increases.

· Reconsider financial incentives that seek to steer students into specific programs such as STEM, which chips away at the historical value of a liberal arts education while funneling resources to students who would choose a STEM field, anyway.

· Adjust thinking and begin to see so-called nontraditional students as “new traditional,” since a large and rapidly growing segment of the college population is comprised of adult, working, low-income, first-generation and minority students.

· Reconsider financial aid programs and course times that benefit only students who enter college full-time immediately after high school, which often excludes adults returning to college and other underserved groups.

· To encourage persistence, forgive loan debt as students progress in their degree programs.

· Provide “affordability guarantees” to students on the front end and “be bolder about debt relief on the back end.”

· Clarity, transparency and accuracy are essential in communicating financial aid programs to students up front.